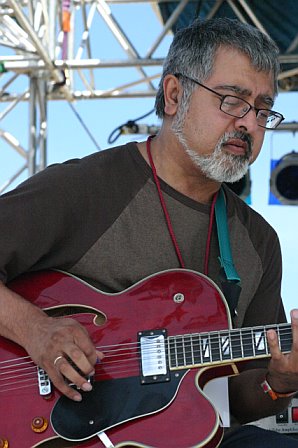 AL: How was Garaj Mahal formed?

KE: A lot of coincidence. Basically, a few people in the bay area came up with this idea. The band KVHW fell apart, our drummer, Alan Hertz, was in KVHW, so he was looking for some other musicians to play with. Fareed’s name came up and some other musicians names came up. So it became this kind-of jam session. Then the jam session turned into a band and then the band turned into this touring act and here we are. None of us sat down and said we want to put this band, Garaj Mahal, together?. Even the name, the name basically came together because we actually had people vote on a website, what name we should have. And one person came up with the name and we all just said, Oh, this is a good name. We had to go through a lot of names. So, the whole band just sort of just came together, organically so to speak.

FH: At the same time, I think I was interested in playing with some younger musicians, so it was a fruitful adventure.

AL: Is there a difference playing this music in Europe rather than in America?

KE: It’s a lot different, it’s very different. It’s hard in the states because most of it is independently funded. The infrastructure just isn’t here for Jazz music, festivals and such as it is in Europe.

FH: Joe was a unique experience. He also seems to go through musicians rather quickly. It was great playing with him, it was a great time. The pressure was quite high, but at the same time I probably learned more during that time than I have ever. I’d do it again in a second. At the time, after a year of doing that, it was time to move on, but it was a great year.

AL: What is different about Garaj Mahal music from the stuff you guys played with John McLaughlin and Joe Zawinul?

FH: It’s more about dance. I think it is very sacred. You get an audience that’s sitting in chairs and what they’re willing to get from the music is slightly or maybe completely different from an audience that’s standing up, and wanting to dance. I don’t think there’s anything wrong with either of those. But they are different. I for one definitely play with more of an attitude of let’s celebrate, let’s party, let’s get down in certain situations. And in other situations it’s more about let’s listen, let’s not talk. I think they’re both valid.

KE: On some level it’s all the same to me, even if I go and I play a wedding, on some level it’s like playing with McLaughlin. But that’s something that I’m developing lately because I’m touring so much and playing with so many different people that I need something to hold onto otherwise I’d go crazy. Because everybody has a different sound, a slightly different vibe, a different feel. So in a way, I’ve always done best if I was able to adapt to someone else’s feel and at the same time ground myself in the situation. So as soon as I say OK now I’m going to play with McLaughlin, I’m going to have a different attitude than playing the wedding when nobody is listening, then I will start hating the wedding but I have to play the wedding here and there because I have two kids and they need to eat. So the older I get, the more I’m kind of like OK ?- music is music, I’m neither the judge, nor am I the victim. So the moment the music starts, of course it’s an idealistic point of view and sometimes, I just can’t handle it, I’m like damn, this sucks or this is great. But still, on some consistency level, I do best if I just stick with tempo and with harmony. The moment I commit to a gig, I want to be there 100% because for me the people are the most important. To me the whole reason that music exists is because it helps the human condition. Life is hard for everybody on a day to day basis and music helps us out with it. It makes us feel good about life.

AL: Do people have the patience to listen ?

FH: That’s why the jam band scene has become so important. Because people are re-learning patience, because they are willing to sit with a groove for 20 min that doesn’t change and think, That’s cool. That’s one of the biggest things that’s healthy about the jam bands. It’s about finding out the value of hypnotic and trance. It’s never really gone away, those Asian, African, Native American elements, the more earthy, organic elements of music. That’s not good music, sophisticated music but I think people are amazed that this still exists today and that it can exist right along side the more sophisticated music and become one, it doesn’t have to be a separate thing. Eventually music should become something where you can sit down and listen to it and get up and dance to it, and it’ll all be good.

KE: It’s all about how societies build in sophistication- they meld up and then they get to the point of becoming decadent then they crumble, then they build up again, like the ancient Greek civilization right? They built up, up, up then crumble, crumble, crumble, Rome, the United States and the western world is on the same path. It’s in the process of crumbling right now. And I personally don’t know where this is going to go. I definitely see the short attention span of kids. This is a direct result of mass media and the negative effects of mass media. It’s all about what can we project to the public to suck them in so they will give up their money. So if this is in a society where it’s ruining any genuine effort and you’re not going to have much patience for fusion or any music which is more spiritual or requires people to pay attention or let them in on something. It’s not going to do it in a situation like that. So, it’s funny, I kind of feel like I’m in the middle of a great decline but I still have to live out my lifespan and I still have to find a way to talk to my son, and say hey, it’s worthwhile being alive today and we’re on a mission and this is what we’re doing here. It’s very challenging.

AL: How is Garaj Mahal different from the Fareed Haque Band ?

FH: I think that the Fareed Haque group is more organic, eastern, than Garaj Mahal. I enjoy both for their own reasons.

AL: How much has Nusrat Fateh Ali Khan influenced your music ?

FH: Tremendously. We are going to play a couple of tunes tonight that have been influenced by him. I would have loved to play with him, but sadly he left us too soon.

AL: Well guys, thanks a lot for your time. Congratulations for the success with Garaj Mahal. Keep it going..
It was quite a memorable experience speaking to these guys and then later conversing with Alan Hertz and Eric Levy. They are both tremendous musicians and such a great complement to the band.