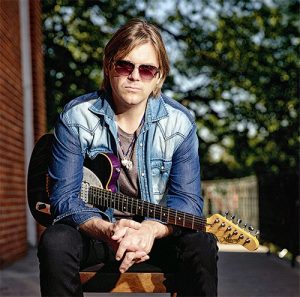 Shane Theriot serves as the Neville Brothers’ lead guitarist. But he does plenty of things on his own. He has a new record out called “Grease Factor”. It is a collection of his ideas apart from the group think that must exist as a member of someone else’s band. It is quite an impressive outing. Shane was able to spend a few minutes talking with Abstract Logix.

AL: How did you attain all of those wonderful tones on the new CD?

ST: Some good amps and a great engineer! Really, you can have all the best equipment and gear, etc.… But the tone comes from your hands. From my studio experience I’ve learned what to use and what not to use in order to produce a certain sound- I’m always experimenting and trying different combinations of amps, pedals- the cheaper the better! haha I feel you can get more personality out of a low-tech thing than some high grade boutique amp.

AL: Are you totally happy with your new CD?

ST: I like to think making the record was comparable to making a movie- I knew exactly who was going to play on each tune, (actors) and what each tune would sound like afterwards. Actually most of the tunes were written with a specific drummer in mind- Little Hat and Dublin were written with Vidacovich in mind, and the funk things had Batiste’s name already on them. The Apartment was written for Jeff Sipe to play. Of course, some things took on a mind of their own after hearing the playback- that’s always the magic of building a track and what you shoot for.

AL: No two tunes sound alike. Was this a conscious decision?

ST: No, I just wrote and cut the tunes when I could. The running order was tricky because of the variety of moods, but those are just the way I heard them. My goal with “Hwy 90” and “The Grease Factor” was to utilize the sounds around me (south LA. Cajun / Zydeco, funk, brass bands etc.) and combine that with modern rock and jazz concepts. I try to just let it happen, I don’t want it to sound contrived in any way, but the grooves from these styles of music are just fun to play, and easy for a listener to grab on to.

AL: Can you compare this CD to your last one?

ST: “Grease Factor” was intentionally meant to be a vehicle for heavier guitar playing. Not a chops record per se, but just something that I wanted to not hold back on. I’ve often played heavier guitar parts and solos on other peoples records and wanted to apply that to my own project.

AL: Do you teach?

ST: I haven’t done much teaching at all for the past 8 years. I’d like to set up a few students at some point; I just don’t have the time now. Occasionally, I write for Guitar Player magazine and Guitar 9. I’ve also done some instructional books- “New Orleans Funk Guitar” for Warner Bros. Also, Adam Nitti and I are working on an online music school called Music Dojo. Teaching is important because when you get the right student who wants to learn, you teach yourself more in the process.

AL: How important was your experience at GIT? (Guitar Institute of Technology)

ST: GIT was a great time in my life; I met lots of players from all over the world and still have friends from that time. I still visit there and teach occasionally, and stay in contact with a few of my old teachers like Scott Henderson and Dan Gilbert.

AL: How has performing with the Neville Brothers helped your guitar playing?

ST: It forced me to simplify some things and really got me into the feel of a song. Saying what you want to say in 16 bars or whatever and getting out of there….also dialing in a variety of tones in a short amount of time- we don’t sound check at all! I think it also has added some fire to my playing that you don’t get by doing session work every day.