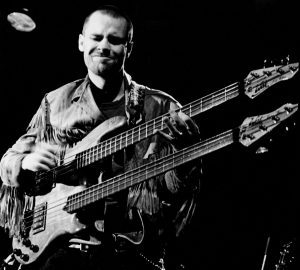 Bassist Jonas Hellborg has been doing his own thing on stage and off for several decades now. He first made his name as a scene stealing partner in John McLaughlin‘s bands in the 1980s and made contributions of his own on many stellar recordings with musical partners such as BucketHead, Jeff Sipe, Ginger Baker and Shawn Lane. He is also noteworthy for having formed his own record company to distribute his material years before it became the fashion to do so. Recently, Jonas agreed to answer some questions from Abstract Logix.

AL: Are you pleased with how your latest CD, Icon, came out?

JH: I really like the way the whole thing came out. Both Shawn and I have been very interested in South Indian Carnatic Music. This album is a follow up to “Good People in Times of Evil”. We have been learning a lot from playing with The Vinayakarams, and this is a result of that. There is a lot more percussion on this record and we have great vocals from Uma Mahesh, which creates a balance that I have been trying to achieve.

AL: How did you meet the Vinayakaram brothers?

JH: I had been hearing a lot of great things about V. Selvaganesh in Europe. However hooking up with him was very difficult. Finally he came to Paris to perform with Zakir Hussain and it was Zakir who introduced me to him. Then it was a slow progression. Selva brought his brother Uma Shankar to play ghatam (Clay Pot) and then Vikku suggested that I also invite his other son Umamahesh to add his strong vocal elements.

AL: You are fascinated by Carnatic Music.

JH: I have always been a great admirer of Indian classical music. Shakti was a great influence on me. At that time I did not quite understand the musical complexity of it. The more I heard it, the clearer things became. I have always been a huge fan of Vikku Vinayakaram, and today I really understand his impact on the music of Shakti. He was essentially the most important element in that band. To me, he is one of the best, if not the best percussion player in the planet. He is one of the greatest human beings I have met and I really admire his musical tradition.

AL: Where did the album cover come from?

JH: The album cover is from a mural in Barcelona. Since the name of the album is Icon, I think the portrait of Jesus just fits right, considering that he is the biggest icon in the western world. If you look at the liner notes in the CD I think everything will fall in place.

AL: Do you plan on sticking with Indian fusion?

JH: I am actually working on a couple of different projects. One of them is based on Western Classical music since it has always been one of my favorites. I think it will take some time, since the music is very involved and complicated. Also, I am working on a record with Bob Moses, the great drummer. I am writing music for it.

AL: You have developed quite a rapport with Shawn Lane. How important is that relationship to your current music?

JH: I can’t think of another guitar player who would fit better. It does not matter whether Shawn plays guitar or any other instrument. He is the only other musician I have met that has the same musical ideas and influences that I do, be it western classical, jazz, rock, Indian, absolutely anything. Once we begin playing, we know what the other feels. We can talk with each other in any musical language. On this record, I asked him to sound like a Sarangi. He is so full of musical ideas that I can point him in a direction and the rest is all him. I never ask him to play things in any particular way. He just has a tremendous musical capacity.

AL: Is there any Jazz-Rock on the way?

JH: Absolutely. I am working on some Ginger Baker material and other things too. It’s coming….

AL: You are about to tour India.

JH: I am very excited to go to India. I have always wanted to play concerts there. Since it has always been a dream of mine to play in India, I am privileged to play there with the Vinayakaram brothers at the same time. We also look forward to do our jazz-rock stuff in front of Indian audience.

AL: Thanks a lot for your time Jonas. We want to congratulate you in making a heck of a record and wish you all the best. Thanks to all of you that make it possible. 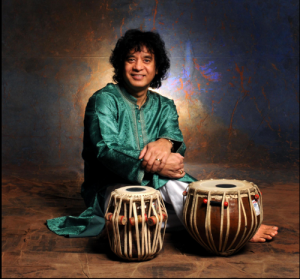 Buy Itunes-note Amazon Bandcamp A master percussionist of near-superhuman capabilities, Zakir Hussain has over the course of his illustrious career