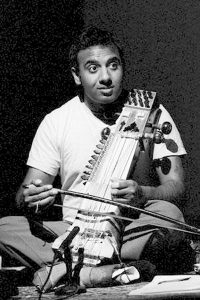 AL: TELL US A BIT ABOUT YOUR MUSICAL BACKGROUND.

SS: I started playing the clarinet when I was younger. It was my grandfather’s instrument; I had my eye on it for a while. It was an old battered one from India. After much coaxing and sweet talking to my grandmother, I managed to get it and it was all go from there. I went to India in my teens to study Sarangi under Guru Shishya Parampara (the traditional Guru Disciple way) with my guruji Ustad Sabri Khan, India’s foremost Sarangi Maestro. Being raised in the UK, I was exposed to lots of different music and soon became passionate about jazz, orchestra and of course Indian music.

AL: YOU ARE A SARANGI PLAYER.

SS: I had always loved the instrument, but due to its complexities there are now just a handful of masters left. So I had to leave England and move to India to study. This is probably still the only true way of learning Indian Classical music.

AL: WHAT IS THE VISION BEHIND SAURANG ORCHESTRA?

SS: Well, just to create a vehicle for my favorite Indian and western instruments with orchestra.

AL: HOW DID YOU MANAGE TO GET MUSICIANS LIKE GEORGE BROOKS, STEVE VAI, AND ANDY SHEPPARD TO PLAY ON THE CD?

SS: Just a call saying hey man you want to play on my new record?? Ha ha, seriously though, it was quite a reassuring experience to find that many of the musicians were willing to perform on a very small / no budget project for the love of the music. Sometimes artists get so absorbed in the industry that they forget why they became musicians in the first place! It’s often hard to talk to artists about the music without first having to deal with managers who are really only interested in the money (and in this case there was none!). But fortunately the guests on this album had a passion for the music and put that first. Though I have to say there were a couple of fine soloists that I approached who were only interested if the fee was juicy enough!

AL: THE CD WAS RECORDED ALL AROUND THE WORLD.

SS: Yes, it was quite bizarre. One day I was at my friend’s tiny Calcutta studio in the sweltering heat, two days later in Los Angeles at Vai’s luxury home studio. It was also quite a challenge in terms of recording formats (Pro Tools Mix24, Pro Tools Digi 001, Pro Tools free, ADAT, Tascam DA88, Cool Edit). After all that, bringing all the various session takes back to Birmingham, England to compile and edit. To have recorded musicians that I am a fan of, for my own record, was one of the most rewarding aspects of this project.

AL: SOME CRITICS HAVE DAID THAT THE MIX OF PHILHARMONIC ORCHESTRA WITH AN INDO-WESTERN SOUND IS A NOVEL CONCEPT.

SS: Hmm maybe, I try not to think in terms of new / old or innovation etc., just write nice tunes and get great musicians to play on them. What could be better? I think you lose the sincerity in your work when you think too much about it. I prefer to just trust my own instinct and suffer the consequence later or maybe not if you are lucky.

AL: DID YOU WRITE OUT THE MUSIC FOR THE VARIOUS MUSICIANS ON THE CD?

SS: I wrote for the instruments more than the soloists, but you know, when you have incredible musicians they bring so much more that you imagine. For instance, Sunday Morning in Calcutta? was just an on the spot decision because I had to have more acoustic from Vai because he is such a good acoustic player and there are hardly any recordings of him playing acoustic.

SS: I am just finishing off mixing the new record, “Cycles & Stories”, which is out in March. Then we start a long tour in Europe and hope to be in the USA later in the year. More tour dates will be announced soon. Tour dates will be posted on my website.