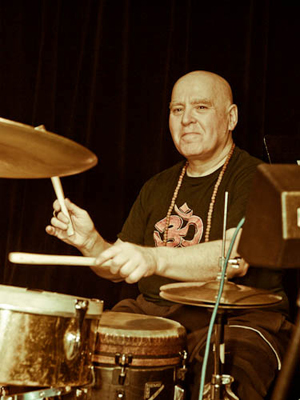 ‘Rakalam’ Bob Moses is a living legend. A musician and a drummer of enormous capacity and range, he is a human being of humility, grace and compassion. Ever since childhood he has lived around music. Imagine growing up in the same building as Max Roach, Abbey Lincoln, Elvin Jones, Art Blakey, Rahsan Roland Kirk and where Charles Mingus was a frequent visit. He started to play drums when he was 10 years old and also played vibes in local Latin bands in his teens. He appeared with Rahsaan Roland Kirk in the mid-60s and formed Free Spirits with Larry Coryell and Jim Pepper, the first jazz-rock band. After a short stay with Dave Liebman’s Open Sky, he joined Gary Burton. In the early 70s he formed Compost with Harold Vick and Jack DeJohnette and toured the UK with the Mike Gibbs Orchestra before returning to the groups of Gary Burton and Pat Metheny. His record “Love Animal” is a timeless piece of music. The music was recorded in 1968 and released in 2003 received rave reviews everywhere. Years from now drummers will thank Bob for his contribution to the instrument. Jeff Sipe (Apt Q258) had an in depth conversation with his hero and here is what went on.

AL: It is our privilege to speak to you. Would you care to tell us how you have been spending your time?

BM: Thank you. I have been teaching at the New England Conservatory for quite some time now, helping young , aspiring musicians access their spirit and live the music that is true for them. It is a very enjoyable and fulfilling work. Also, I have been putting together some music for a couple of projects that I have been working on since 1998. Due to financial constraints, it has been taking a bit of time. Some of the music was recorded right here in my room. It is the first time that the name ‘Bob Moses’ will not be used on a record. I plan to use the name ‘Rakalam’ which was kindly given to me by Spiritual Grand Master Tisziji Munoz. I like to leave the past where it belongs and look in a forward direction. I hope the music speaks for itself.

AL: Tisziji Munoz has been quite unknown among the masses yet he is an icon for you, Rashied Ali, Paul Shafer and a host of other great musicians. Would you care to educate us about him?

BM: I met Tisziji around 1980. He is a highly spiritual being who also happens to be the greatest and most powerful musician that I have ever heard or played with. One of the reasons that he is not well known is because he does not involve himself in promoting his music at all. He has some amazing records and I was fortunate to play on a few of them. You can get his music at anamimusic.com My work with Tisziji is more about life and spiritual practice than about music. I was blessed to be given the name ‘Rakalam’ (the inaudible sound of the invisible sun). I would prefer being called that by everyone. I am in the very early stages of my spiritual path and I hope that I can keep moving forward and and live up to the true essence of the name bestowed upon me.

AL: What is your process of composing music?

BM: These days if I use any composition at all , they are very simple and non personal melodies that just serve to open the heart. There is nothing hip or clever about them at all. If you are too attached to the compositions then you lose the essence of spontaneity – the true spirit of the moment.

AL: How do you reflect on music today? Do you think there is a certain sense of anger?

BM: Perhaps, but I think the anger was always there but back in the day it was probably more repressed. It does not really matter if it is done honestly.. My son, Rafael, loves rap music and does some great things with beats and samples. There is a substantial population that is getting into that vibe, and it is a good outlet for their creativity and emotions. Besides, to a spiritual being so called positive and negative are still aspects of one.

AL: 2003 saw the light of a much anticipated recording, “Love Animal”  recorded in 1968. Can you reflect on the music?

BM: Yes, it has been quite a while or several lifetimes ago since that music was recorded. I have been asked a few times to release the record. We mastered the music from a cassette tape! The way we played back then was a sign of the times and had a certain raw vitality. Jim Pepper, Larry Coryell, Steve Swallow, Keith Jarrett and myself were taking chances, experimenting. I look back on those times and laugh about it. You know, what I am doing today, spiritually and musically is so different, but it has its roots in that period. The great drummer, Billy Martin persuaded me to release it on Amulet Records. I hope that people of today enjoy it.

AL: Do you practice or rehearse anymore?

BM: Practice, Yes, Rehearse No. When I play I surrender to Spirit and Spirit burns brightest in the present. My credo is ‘Learn it to burn it’.

AL: Do you encourage your fellow musicians to do the same?

BM: Each must walk their own path. Certainly, there is a feeling of freedom, love, and lightness when the playing is not mental and one has cut all gravity lines. Many musicians like to play what they know. I have a need to play what I don’t know. The musicians who choose to play with me will hopefully be opened and encouraged by my example to play something new, at least for that moment. For me it’s not a stretch, it is a way of life.

AL: What’s in your stick bag? (As Bob creates a colorful sonic splendor)

BM: Sticks cut direct from the trees, they are all different and they make different sounds. They become friends, almost a part of yourself.

AL: Thanks a lot for your time Bob. We are looking forward to hear a lot more music in the coming years.