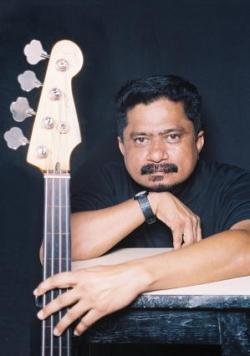 JG: What inspired you to become a jazz artiste? When did you decide that this will be your career?

CD: Like most musicians, I got into music initially with school / college bands. We used to play pop / rock covers and even at that time I remember always wanting to play those tunes my own way. I was improvising even before I knew what jazz was all about. Soon after I finished college I worked as a copywriter for an ad agency. Around that time I also got into a five star hotel resident band. It was time to decide weather I would spend my life playing music or selling soaps and toothpaste. An easy decision for me.

JG: Any particular jazz artistes or musicians who have played a role in your own development as a jazz artiste?

CD: There are far too many great musicians who inspired me and continue to inspire me. The one that knocked the socks off me though, was a bassplayer by the name of Jaco Pastorius, a legend who took bass from a background blur right upfront and into the listeners face.

JG: How did you train to become a jazz musician?

CD: Most of my learning came from listening. I initially picked up stuff from recorded tracks by ear. Once I decided to play professionally, I realized I would need to know more about what I would be spending the rest of my life with. I taught myself to read music and then went through a whole lot of theory to enhance my musical vocabulary.

JG: What are the components that go into the genre of jazz?

JG: In your view, how popular is jazz as a music genre in India? Do you think people really appreciate it?

JG: What do you make of the present international scenario as far as jazz is concerned?

CD: Jazz has a niche audience worldwide. Pop music will always rule. It will rule today and will be ruled out tomorrow, while jazz blissfully evolves, embracing all other forms of music along the way.

JG: Did you try your hand at any other genres of music before deciding on this one?

CD: I don’t think there’s any musician in this country who has played with the number of bands, musicians and music genre’s that I have. You can review some of the bands at my website www.jazzyatra.com

JG: Tell us a bit about yourself and give us your take on how your career has progressed so far.

CD: Music helped me get out of my shell and face the world with a song. If it wasn’t for music I would have been a light house keeper on Andaman Island or even worse, I would have been a doctor, lawyer or engineer. My career flows in the direction of my heart, I’m happy to be earning a living off something I’ve always been passionate about. I’ve performed and toured worldwide with some legendary international artistes as well as local icons like Sonu Nigam, Asha Bhosle and Remo Fernandes. I currently work on two resident band contracts in the afternoons at the JW Marriott hotel with my fusion ensemble called The Brown Indian Band for obvious reason and at night at the Taj Lands End hotel with my band called the Bassman’s Band for some strange reason.

JG: You have mentioned in one of your previous interviews that it would be more appropriate to call jazz ‘world music’. Why do you say that?

CD: Simply because jazz is the most open, alive and continuously evolving form of music that embraces all other forms of music in the world today.

JG: Which of your gigs would you recall as being the most memorable and why?

CD: So far the most memorable would be the Hennessey XO international jazz tour that I did in 2005. This world renowned jazz tour has always been signing on artistes signed to the famed American ‘Blue Note’ record label. After hearing the band in Mumbai, Hennessey head honchos decided that they would break tradition and sign on a jazz band from far away India. A huge feather in the cap for Indian jazz musicians.

JG: What are your other passions apart from the obvious one, jazz?

JG: You had the opportunity to play with Daniel Pearl as part of Jazz Junction. What was it like playing with him in the same band?

CD: Daniel Pearl was an accomplished violinist who was very easy to get along with so it was always fun having him onboard.

JG: Can you tell us about the concert you have lined up for October 10 to honor Daniel Pearl’s memory?

CD: Me and my friend Meldon D’Cunha who owns Soul Fry were among the innumerable friends Daniel made wherever he went. We’ve been organizing this event every year to keep his memory alive. This year the event will be a jam session where I’ve lined up a house band made up of Jarvis Menezes on keyboards, Ian Enthiado on drums and myself on bass. We’ve invited just about every singer and musician who perform on the local circuit including some from Goa

JG: Some pearls of wisdom for young people who might want to become jazz musicians.

JG: Something wacky that that no one would know about Colin D’Cruz..

CD: I’ve been rehearsing the conical jock strut for years. Watch out for my next pop gig!