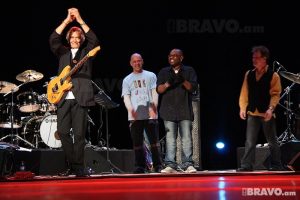 John McLaughlin and The 4th Dimension played two concerts (both sold out in advance) at Nasjonal Jazzscene Live in Oslo on November 20 and 21. The concert´s first number was Guitar Love from the new album, “Now Here This” followed by Little Miss Valley and Abbaji dedicated to the father of Zakir Hussain in Shakti, the late and great tabla player Allah Raka. In the middle of this number The One Truth Bands´ Love and Understanding featured the 4th Dimension on vocals. This was followed by a high octane version of Hijacked featuring Etienne Mbappe on five string bass guitar, a magnificent piece. His solo was very different from the one by Dominique DiPiazza on the album “Que Alegria”. The concert featured some drum duets with Ranjit Barot and Gary Husband (switching from keyboards). In addition Ranjit Barot was featured on vocal (konakol) and drums. The band played Maharina and Light at the Edge of the World. As encore the band played A Love Supreme with the members of the group chanting A Love Supreme – Supreme, Supreme. All in all these were two magnificent concerts – highly recommended.