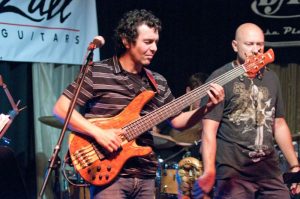 Bassist and composer Adam Nitti is making his mark. He is always a treat to see perform with any musician. His unique style and sound stands out. We recently caught up with Adam as he is preparing for his electronic education project with John Patitucci.

AN: My parents had given me a toy drum set around the time I was 5 years old. My uncle later gave me a toy acoustic guitar, and I remember experimenting with these instruments with a lot of enthusiasm. Music had run in my family on my mothers side, and I had an affinity for it at an early age. Although I was still a little shy when asked to play something for other people, I always had a fascination with performers and the idea of making music. My parents later enrolled me in classical piano lessons when I was around 8 years old. I progressed pretty quickly, and eventually got to the point where I was performing at group recitals that had been put on by my teacher. Although I was showing some promise with classical piano at a young age, I later rebelled when I decided that I only wanted to play rock and roll. My parents, who were disappointed at the idea of me discontinuing my lessons, eventually succumbed and were kind enough to purchase a used Korg synthesizer for me. They figured that doing something with my talent was better than doing nothing, so rock and roll was going to have to do. I started a band with a few of my closest friends when I was 13, making keyboards my main instrument. But when the bass player decided he wanted to switch to rhythm guitar, I volunteered to give the bass a shot. For a while, I was doubling on both instruments, but within a year my love for the bass led me to drop keyboards as a main instrument, and the rest is history.

AL: Your CDs “Evidence” and “Balance” were eye-opening. You had a lot of players on these CDs.

AN: Thank you for the kind words. It was an honor getting to work with such great musicians on these records. Their input and individual styles are what made each song come to life, in my opinion. I selected players based on what I thought they would bring to the table for each composition, but what is so amazing is that no level of foresight can accurately predict how a song is going to develop when you are coming from an improvisational perspective. Although I had the general concept for each tune in mind before we started recording, I knew that each of these incredible players was going to mold and shape the tune as we went, and that was especially exciting for me. I encouraged each player to experiment as they felt led to do so, and I feel like you can hear a certain level of spontaneity in a majority of the tunes. The Balance record in particular was especially interesting for me to do because it was the first time I had depended on technology to bring long distance players together on one recording. For example, both Dave Weckl’s and Kirk Covington’s drum tracks were recorded in their own home studios in California. Because of this, I had to produce each track and monitor our progress without actually being there. I ended up having to correspond with them through phone calls, mailed recordings, and scratch (temporary) tracks in order to keep the tracks cohesive. That was pretty challenging to do.

AL: Dave Weckl and Jimmy Herring recorded with you.

AN: Well, as I had mentioned earlier, Dave’s involvement with the recording was at a distance, se he was challenged to play off of scratch tracks that I had provided. My biggest concern when trying to record in this multi-tracking fashion was to try and keep the recording sounding as live as possible. I knew that Dave’s drumming was going to inspire other things from the rest of the players, so I had him do his tracks immediately after I had completed my bass tracks and the keyboard tracks. Dave was able to create a definitive vibe between the bass and drums and bring the tune to life, since he had the main rhythmic and harmonic ingredients to work from. Then, when Jimmy recorded his parts, he was able to treat the whole thing as if he was performing live with Dave and me. It was a unique way of building songs, but I feel like we did a good job of still capturing somewhat of a live feel.

AL: You do a lot of teaching. How do you approach that side of things?

AN: I try my best to customize my teaching approaches for each individual student. Most of the students that come to me now have already been playing for a while, so they usually already possess some sort of foundation. What I try to do is take them to the next level by harnessing their strengths and using those strengths in new and more unfamiliar contexts. For example, if a student of mine has been predominantly playing by ear for most of their life but wants to learn to read music, I might show them what pieces of their bass playing look like on paper. So, I might start them off by learning how the shapes and sounds of their lines take on particular characteristic forms when written down on the staff.

AL: What are you cooking up?

AN: Currently I am working on what will hopefully be the world’s first truly interactive online music school. Me and my partner in this, Len Sitnick, have been working on this idea for about 2 1/2 years now, and are finally seeing it come to fruition. The name of the school will be MusicDojo.com, and we will be presenting music education online in a revolutionary way. Students who enroll in classes will be able to study in an online classroom environment, which will be interactively led by their instructor. Students will actually be able to submit their work for review, as well as interact with other students and teachers musically through digital recordings that can be transferred online. Well be posting more info about the school as we get closer to the launch date on my website, www.adamnitti.com. I’m really excited about this because we will be creating a global virtual campus in which folks from all over the world will be able to study in a way that will give them a level of individual attention. We have some awesome instructors/players on board already, such as John Patitucci, Joseph Patrick Moore, Shane Theriot and Steve Cunningham. Once MusicDojo is up and running, I’ll be able to get back to focusing on my next record. There will be one added surprise, though… It’s going to have vocals on it.

AL: Is performing a balancing act for you? Do certain elements take over?

AN: When I am performing, I really don’t think about any of those things in particular. I try to play what I hear. I’d like to think that each of those elements is continually developing on their own. There was a time that I used to focus on those things individually. When I was coming up as a player, and was really in the woodshed mode, I sort of approached things like technique and phrasing as separate entities that I would work on as part of a practice routine. Now that I have gained some more experience as a player and have been doing this for a longer period of time, I have gotten to a place where I don’t really separate them from one another anymore. These days I work on the collective sum of all of those things put together, so the balance is kind of built into that approach already. The things I practice now are different from what I practiced when I was in my late teens. Players go through different stages of development as they grow, and right now I’m in a stage of exploration and expression. For me, these stages continually cycle, though, and I can already feel a need to go back to the woodshed pretty soon to get ready for the stage that follows this one!

AL: What would you say to aspiring young bassists?

AN: Don’t make the same mistake I made when I was younger and just focus on practicing just one thing that you think you need to master to be considered a great bass player. Open your mind and ears and work on all the elements of music. My mistake when I was younger was that I was mostly practicing techniques and chops and nothing else. I thought that the most important thing back then was being able to play incredibly fast and clean because that was ‘where the flash was at’. I spent hours a day on my chops alone. Unfortunately, I paid the price later because once I got to college and became interested in jazz and improvisational music I really struggled in jazz and big band ensembles because I didn’t know anything about harmony or what to play when faced with chord changes. I also didn’t pay enough attention to reading music, and that caused me to struggle with charts, as well. Also, you can’t ignore the importance of learning to play grooves and play time in a solid manner. That is one of the most (if not THE most) important skills to have together as a bass player, because that is what folks expect from you if they are going to be playing with you. The moral of the story is that once I got my butt kicked in those first jazz band classes, I realized I had to get my stuff together, and I worked on my theory, grooving, and reading day after day until I was competent with it. And trust me, I was appreciative later because those skills are what allowed me to make bass playing my profession. Stay well-rounded in all you do.