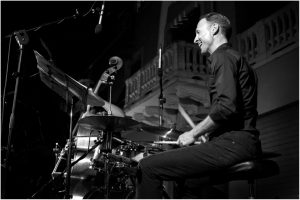 Drummer Andrea Marchesini has caught the ears of some mighty fine contemporary musical artists. Using NYC as a base, he has played and recorded with such stars as Mike Stern and Jonas Hellborg.

AL: What is your background?

AM: I was born in Alassio, on the Italian north-western Riviera, in 1960. German mother and father from Sud Tyrol, a strange combination in a relatively new town which experienced a strong post-war growth. My dad owned a legendary 50s-60s Club with live dance music, this is where I first touched instruments, and drums in particular. But strangely enough those old episodes (I was 7!) got totally forgotten in my mind for the longest time. Then came The Beatles, which I listened to at age 12. The song Help really fascinated me, and the whole White album would be played all day in my house. Then came Lucio Battisti, in my opinion the greatest Italian composer of recent times (alongside with Ennio Morricone of course). But what really killed me was Genesis in 1973 (I was 13; they put out my favorite music), played to me by a friend. After that the itinerary was quite simple: the whole British (+ some Italian & French) romantic-rock scene led me to fusion, and fusion to jazz. My drumming began in 1974. A friend in school said let’s put a band together, and there I was, with a rented 4 piece kit, playing by ear, and in a very short time being able to play very decently! Let me tell you, in those days, where I was, I had absolutely no idea of how drums would be learned, taught, be written, etc. What made everything a little clearer was Modern Drummer, to which I subscribed in 78 or 79. What I did then was buy a few Dante Agostinis, and taught myself everything without any instruction! My ears were good though, and I could figure out just about any lick on a record (that was before Weckl, El Negro, Chambers, and those other guys) I never studied a lot (money & will are the keys to practicing; if you’re missing one of the two, learning becomes a slow process), but I took my first lessons in Milan at age 22 (Paolo Pellegatti; good Italian jazz drummer; jazz only?). Then I put together the most important project of my entire life. We had a jazz festival in Alassio in the ’70s, and both Andrew Cyrille and Tommy Campbell told me things about going to New York. They found fertile ground; all my favorite music and drumming revolved around NY: Steps & Erskine, Weather Report & Omar, Steve Gadd, Jaco & Kenwood Dennard, and many others. So this is was I did: I just told my parents I’m going, bought a ticket, reserved a YMCA in Jersey City, left with 600 bucks in my pocket, and said to myself Well, I’m already 24, let’s give it a try even though I’m not that much of an expert. I stayed in NY for 5 years, studied part time at Drummers Collective (with Dennard, Malabe, Robbie Gonzales, Kim Plainfield) also because I needed some practice time in their boots, played in dozens of bands and clubs, recorded many demos and a few records, in other words I was a small particle of the drumming scene of the 2nd part of the 80s (Zack Danzinger being the killer in those days!). But for details on who I played with and where, a look at my web site (digilander.libero.it/marchesini1) would make this answer a little easier to go through! Anyway, New York was hard to live in. I mean incredibly exciting the first couple of years, hard the 3rd, unbearable afterwards. I’ll explain what happened afterwards in the next answer.

AL: You recorded a record with Hellborg and Stern way back in the late eighties.

AM: I played with some incredibly good musicians in NY, and always original music, but at some point, while I was thinking about moving Back to Europe I felt the urgency of bringing a recorded testimony with me, and it had to be fusion, ‘course that is what I dug the most (hey, Metheny is my favorite music, and I still listen to a lot of Yellowjackets). So I started writing some material totally by ear & voice, but with the help of a sequencer. And I’m particularly proud of my compositions, although they may sound too structured to some, and not that much harmonically evolved, but hey, for those days, for a forgotten Italian, with little or no instruction, I think I came out with some very good stuff. I put together a few excellent former band mates, played some gigs, then planned the recording. I hired Hiram Bullock for initial production (I loved how Stern’s 1st album sounded!) and went to the studio. Hiram called Stern, ’cause I wanted a special guest on the album to make it more appealing (hey, I used to go to listen to Stern at the 55 bar on Christopher Street back in ’84. A killer player with a killer sound! In those years Stern’s records were the very good side of fusion; Spyro and Corea a little less?). I only had money for pre-production, so I shopped a rough mix of 4 tunes but not much happened (only a proposal from California where they wanted 2 more self-payed records after this one?), so just about when I didn’t know what to do next I ran into Jonas Hellborg, who listened to the record and invited me to finish the mix in Sweden, at his basement in Lund. So I moved back to Italy, met Jonas, went to Sweden, and because of Hellborg’s sudden fever, ended up mixing my record all by myself in 2 days in his basement (how did I do it? Eventually I did a bad job ’cause I had some huge reverb leakage I didn’t here while mixing?). Jonas printed a few copies as an LP. Later on I did more shopping and got a (bad) deal with an Italian company who printed a few thousands CDs and cassettes, but then eventually went under a few months later. And what really happened was that I stopped playing. Being new in Italy, living in a small town, and having no distribution? well I just didn’t know what, with whom, and where to keep doing music. I sort of married my present companion (Sandra), and opened up a bike shop (Yes, for quite a while I’ve been a real sports freak). But a phone call in 97 (yes, a 7 year stop) just at the right time, made me start again (some decently paid gigs with a cover band), and since then everything has started rolling again. Actually I finally had a real chance of playing a lot while been able to practice in my booth (something I wasn’t able to do in NY. A big town may be great for a guitarist, keyboardists, guitarist; but a drummer has enormous problems with practice time and transportation?), and then came teaching in 2000 which made me grow enormously (once again, self taught; just thinking and analyzing all movements, videos, records, drum methods).

AL: How do you approach playing drums?

AM: I have an almost 360? degrees approach to rhythm and drums. I’ve been influenced a lot by all the greatest old and new drummers and I cannot say I’ve developed much of an innovative personal style. I’m a good all around player who thinks about creating rhythm and groove, about laying down a flowing carpet of sounds, while at the same time keep a fresh and unconventional approach to beats, fills, time, and accents. It’s hard to stay away from the snare-bass drum western approach and I keep my ears open for all sorts of inspiring stuff. Right now I’m a lot into an easy rebound playing, meaning I’d love to improve the non-tiring approach I have with my sticks on the set. Having reached a decent hand technique on snare, drums, and cymbals, I am currently a lot into Latin independence and playing simultaneous intricate (but not fast) cross-rhythms: it’s a hell of a job to study! I’ve also developed a pretty good method of teaching, going through selected material of 30 or more books, my own hand written pages, and following with computer archives every single lesson of my 20 and more students!

AL: You are going to India with Hellborg and Lane.

AM: I am thrilled ’cause they represent an aspect of music I really dig: it’s the play your ass off push I’ve learned in NY, without caring a bit about who likes it or not or if it’s marketable, or if companies and agencies like it or not (what matters is 1. Let’s play good music & 2. Let’s give intense emotions to the audience…). I’ve known Jonas for a while and I know he thinks different about music, he pushes all his ideas a level above standard supermarket thinking. I was a little hesitating the very first days, but while listening to him and Shawn burn and interact and vamp, and while practicing a more intense approach to my set preparing for strong playing, long soloing, and keeping fresh and subtle grooves while keeping ears enormously open, well, I just kept feeling better and better and more confident. I should be at ease with the trio music, at least with the older atmospheres, cause I’ve always kept a double approach to music: soft and sophisticated but also loud and intense; so rock & fusion & funk are always on my agenda and most of the times I just play for myself and my musicians, keeping a self elevated standard of drumming. My only question his how much Indian odd-meter rhythms will be incorporated in the tours repertoire…hopefully a lot!

AL: Have you listened to a lot of their music?

AM: It’s amazing music, and the question is how can so much improvised torrential jazz-rock come out so fluent, exciting, inspiring? Shawn is incredible, and it can take weeks before a good listener can actually start digesting all the super licks, arpeggios, harmonic changes, rhythm bits he throws at you. And Jonas filters all his ethnic hunger pushing out his characteristic punchy sound and giving out tons of fundamentals, alterations, down & upbeats. And Jeff, well, he just comes and goes, grooves and fills, bangs and feathers; all of it with taste and feel. Can’t wait to put my drumming at the disposal of these two monsters and of this different instantly composed music!

AL: Do you have any other projects on the burner?

AM: I am currently doing a Jimi Hendrix tribute with another super-mofo guitarist from Italy, Alessio Menconi (check him out on www.alessiomenconi.com), who is appearing on a new release CD by Comet Records as the only Italian guest (the others being Hiram Bullock, Steve Lukather, Larry Coryell, Andy Summers, Robben Ford [where’s Shawn ?????]), and also promotes an instructional video about How to play in Hendrix style. I do a little cover work with a Sting-Police trio, but most of my time is dedicated to my own JAZZ POT, and in particular to a Michel Camilo – like trio (yes, I’m working on all those Latin beats with the left foot clave etc…) and an instrumental salsa sextet made up of top notch musicians of Liguria. Great stuff!