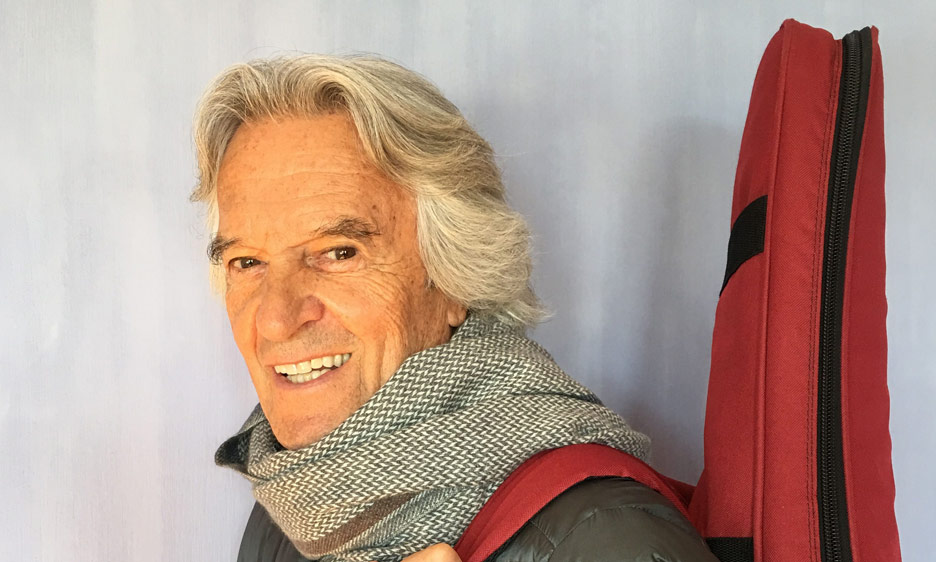 One of fusion’s most virtuosic guitar soloists, John McLaughlin placed his blazing speed in the service of a searching spiritual passion that has kept his music evolving and open to new influences. Whether shredding on electric or simmering quietly on acoustic, McLaughlin’s intensity and underappreciated versatility have nearly always kept his playing vital, and his best moments — whether as a solo artist or bandmember — represent some of fusion’s greatest recordings, including 1971’s “The Inner Mounting Flame” and 1973’s “Birds of Fire” with his supergroup Mahavishnu Orchestra, which included keyboardist Jan Hammer and drummer Billy Cobham. In 1976, he formed the acoustic quartet Shakti with a trio of Indian musicians. They issued three acclaimed albums as one of the first world fusion outfits. He continued to balance his time between electric fusion and acoustic projects; the most notable of the latter was the live Friday Night in San Francisco with guitarists Al Di Meola and Paco de Lucia. They split after a studio offering and reunited in the ’90s with the celebrated The Guitar Trio. In the 21st century, McLaughlin kept on delivering a wealth of diverse projects, but his focus was once again on incorporating fusion from both ends of the rock and jazz spectrum, as evidenced by 2008’s “Floating Point” and 2015’s post-psychedelic “Black Light” with his band 4th Dimension.

Extrapolation McLaughlin was born January 4, 1942, in Yorkshire, England, and began playing guitar at age 11. Initially attracted to blues and swing, he worked with British artists like Georgie Fame, Graham Bond, Brian Auger, and Ginger Baker. McLaughlin formed his own band in 1968 and recorded the excellent debut “Extrapolation” in early 1969. Later that year he moved to New York to join Tony Williams‘ groundbreaking fusion band Lifetime, and appeared on the classic Emergency! Through Williams, McLaughlin was invited to join Miles Davis‘ band, and became an important part of fusion landmarks like “In a Silent Way”, “Bitches Brew”, and “A Tribute to Jack Johnson”. In 1970, wanting to explore acoustic and Eastern music, McLaughlin recorded the classic “My Goal’s Beyond”; he soon left Davis, and after one further solo album, “Devotion”, McLaughlin spent some time woodshedding.

“Visions of the Emerald Beyond” he re-emerged in 1971 as leader of the Mahavishnu Orchestra, a seminal band that did much to define and popularize early jazz-rock fusion, as evidenced by the albums The Inner Mounting Flame, Birds of Fire, and Visions of the Emerald Beyond. Pausing to record “Love Devotion Surrender” with Carlos Santana in 1972, McLaughlin led Mahavishnu until 1975. Returning to spiritual preoccupations on “My Goal’s Beyond”, he then formed Shakti, which fused acoustic jazz with Indian music over the course of three albums. McLaughlin returned to his solo career in the late ’70s, forming a backing outfit called the One Truth Band, and also recording the guitar trio albums “Friday Night in San Francisco” and “Passion, Grace & Fire” with fellow fusion burner Al di Meola and flamenco guitarist Paco de Lucia. As the ’80s went along, McLaughlin experimented with classical-jazz hybrid composing; there was also a short-lived Mahavishnu reunion in the mid-’80s.

“Time Remembered: John McLaughlin Plays Bill Evans In the ’90’s”, McLaughlin continued to record steadily in both electric and acoustic groups. He signed to Verve, where he would remain for 13 years. Some of the more notable albums from that period include the acoustic Time Remembered: John McLaughlin Plays Bill Evans in 1993; After the “Rain with Elvin Jones and Joey DeFrancesco” in 1995; and 1996’s “The Promise”, which featured the guitarist in a number of settings, including a reunion with his acoustic trio partners di Meola and de Lucia, and a trio with DeFrancesco and drummer Dennis Chambers. The drummer was also a part of McLaughlin’s final album of the decade, Heart of Things, a furious bout of electric jazz.

“Remember Shakti: The Believer The 21st century” found McLaughlin in another nostalgic mood, releasing Remember Shakti: The Believer, a live set featuring the guitarist (playing electric guitar) with electric mandolinist U. Shrinivas, kanjira and ghatam player V. Selvaganesh, and legendary tabla player Ustad Zakir Hussain. While it wasn’t a Shakti album proper, it nonetheless echoed that group’s intricate and amazing rhythmic and harmonic breakthroughs. The group toured and released “Saturday Night in Bombay” a year later. McLaughlin’s Euro-classical-leaning “Thieves and Poets” appeared in 2003. The following year, WEA in Germany issued the massive 17-CD box set of McLaughlin’s “Montreux Concerts”, which featured performances recorded between 1974 and 1996. “Industrial Zen”, released in 2006, was a mixed-bag recording where the guitarist’s ambitions ran wild. It was his final album for Verve.

To the One In 2008, McLaughlin issued Floating Point, an extension of many of the concepts on Industrial Zen, on the Abstract Logix imprint. The final track on that album was entitled “Five Peace Band”; it served as the name for a supergroup assembled by McLaughlin and Chick Corea for a one-off world tour. The other members were saxophonist Kenny Garrett, drummer Vinnie Colaiuta, and bassist Christian McBride; an album of the same name was released in 2009 on Concord. To the One, issued in 2010, debuted his new 4th Dimension band, whose lineup included veterans of his other groups: Gary Husband on keyboards and drums, Etienne Mbappe on electric bass, and drummer Mike Mondesir. This group became a collaborative, creative anchor for the guitarist, much as the early Mahavishnu Orchestra had been.

“Now Here This “. McLaughlin resurfaced two years later with Now Here This. The album featured the lone change in the 4th Dimension lineup as drummer and vocalist Ranjit Barot replaced Mondesir. Barot had collaborated with the guitarist on “Floating Point”, but was long established and celebrated as a film composer, music director, arranger, and vocalist. He was also a longtime associate of filmmaker/composer A.R. Rahman. This group toured the world, and followed up with “Now Here This” in 2012. They were captured live on-stage during the last night of a tour at the Berklee College of Music; the set was released as “The Boston Record” in 2014.

“Live at Ronnie Scott’s”. Over the previous couple of years, McLaughlin had been in communication again with longtime friend de Lucia in hopes of recording together. It never happened. The Spanish guitarist passed away in February of 2014. McLaughlin and 4th Dimension released “Black Light” in the fall of 2015. Among its tracks was the acoustic number “El Hombre Que Sabia,” a tribute to the flamenco master. A concert album also featuring the ensemble, “Live at Ronnie Scott’s”, appeared in 2017. That same year, McLaughlin embarked on what he described as a farewell tour, playing songs from Mahavishnu Orchestra’s extensive catalog. In 2018, Abstract Logix issued “Live in San Francisco” — a souvenir of a sold-out concert at the historic Warfield Theatre, where the guitarist last played 36 years earlier. His 4th Dimension band played encores of classic Mahavishnu Orchestra tunes with guitarist Jimmy Herring‘s nine-piece orchestra the Invisible Whip.

“Is That So?” . Back in 2013, in the aftermath of a Remember Shakti quintet tour that McLaughlin, composer and singer Shankar Mahadevan, and tabla master Ustad Zakir Hussain undertook, the guitarist approached the others about forming a group that would experiment with Indian classical music and improvisation. It took six years to synchronize schedules due to the commitments of all three men, and to assemble and/or compose material before recording. In September 2019, the preview track “Sakhi” was released to the Internet. The tune had been written in the early ’70s for Shakti and played live but was never recorded until this band existed. Titled “Is That So?”, the studio album was co-billed to all three musicians and was issued by Abstract Logix.

The mathematics of rhythm are universal. They don’t belong to any particular culture.