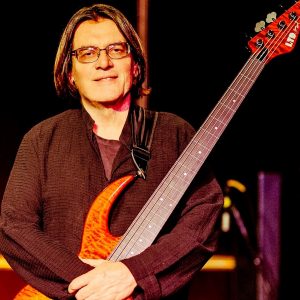 Bunny Brunel is one of the most respected bass players and educators today. He has appeared on numerous albums and played with stalwarts such as Herbie Hancock and Wayne Shorter. His career began in earnest when Chick Corea invited him out on tour in 1978. Bunny recorded Tap Step and Secret Agent with the legendary jazz fusionist. Since then he has been unstoppable, playing on great CDs such as “LA Zoo”, “CAB”, “CAB2” and “CAB4”. Bunny filled Abstract Logix in on a few things.

AL: You have just finished up some work.

BB: We completed the new “CAB” album, it’s called “CAB4” and it has been released in Japan by King Records and in Europe by Mascot/Provogue Records. It will be released in the USA and Canada September 23rd by Steve Vai’s label Favored Nations. Meanwhile I am finishing an album that I started a while back with a lot friends playing on it, like Airto Moreira and Flora Purim, Billy Childs, Patrice Rushen, Bill Watrous and Mike Stern just to name a few.

AL: Music education has become a very important part of your career.

BB: Going on tour is OK when you’re 20 years old, but it gets old after awhile. I’d rather tour less and teach to help people getting better. I never had a private teacher to teach me the electric bass, jazz or anything else, besides a little bit of classical training in the conservatory, so I’m enjoying giving the students the head’s start that I didn’t have.

AL: How did playing with Chick change your musical direction?

BB: Well it actually didn’t change it, it just kept it going forward and I’m still doing it!

AL: You have a successful relationship with Carvin.

BB: I was first approached by the Yamaha company to help them with their line of basses: The BB series, especially the BB3000 is the one that they were doing for me. After that I got contacted by Gibson to make the Gibson Bunny Brunel but they just made a dozen of them. I was contacted by Carvin after two months and they came out with the Bunny Brunel model and they did an amazing job. What I really like with Carvin is the fact that my basses are made by computer controlled machines which makes them all identical- close to 1/100 of a mm! The quality of the manufacturing is perfect down to the smallest detail. The back plate for example, doesn’t have wood screws; they’re using metal screws with small metal inlays. The paint job and the quality of the wood are top of the line. I can take one of the basses off the factory line and go play with it- it’s exactly like mine.

AL: Once you have mastered technique, is there any other place to go?

BB: One has to have good technique so that you sound like you know what you’re doing, but I think too much emphasis can be put on this area of playing music and we lose the organic quality that comes from the soul. I think the idea is to learn as much technically as you can, then forget it so that you can be creative.

AL: How did the “CAB” projects materialize?

BB: I released with Mike Varney’s label Shrapnel records an album called “LA Zoo” featuring Vivian Campbell that was rock-fusion. That gave Mike Varney an idea for me to do an album with Tony MacAlpine and Dennis Chambers. Everybody loved it so we did “CAB2” and now “CAB4”.

AL: What is one thing you tell your bass students?

BB: Practice makes it perfect, and especially remembering that you have to play the bass #1. Bass solos are nice but a bass player needs to know how to play great bass lines with a good groove, perfect timing and a good sound. Keep the thousand-mile slapping licks for your solos.