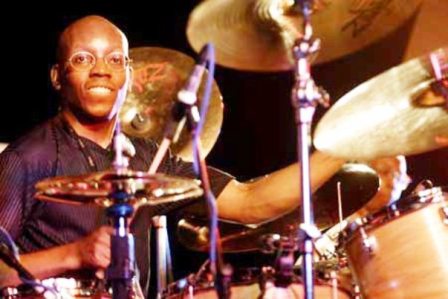 Mark Mondesir knows no borders when it comes to his instrument. His combination of virtuoso stick work, inventive accents, improvisational prowess, and chameleon-like ability to transcend genres has made him one of the world’s most in-demand drummers. Musicians as diverse and influential as Jeff Beck, Art Blakey, Pee Wee Ellis, Imogen Heap, Glenn Hughes, Van Morrison, David Sylvian, McCoy Tyner, and Joe Zawinul have called on him to contribute to their projects. Mondesir began playing drums in 1976 at age 12 and pursued the instrument seriously at age 16. Almost entirely self-taught, the British musician began his career in earnest in 1984 as part of fusion pioneer Ian Carr’s London-based Weekend Arts Center workshops.

“From day one, I’ve come out to play, regardless of my technical capacities, or lack thereof, “says Mondesir. Most drummers seem to collect a bag of chops and then figure out how to make music with it. In contrast, I just went out and played with other musicians and my technique developed as a byproduct of discovering what’s necessary to play in a given situation. I never practiced paradiddles eight hours a day. That would bore me to tears, plus I’ve never been in a musical situation in which I’ve been asked to play a paradiddle for eight hours! Playing jazz throughout my career has given me courage because you have to think on your feet and in the moment. I have no fear of playing in any context. It’s my home.

It was at Carr’s workshops that Mondesir met adventurous saxophonist Courtney Pine, who he played and recorded with until the early ‘90s. Mondesir’s work with Pine exposed him to a broad audience of musicians and listeners, including percussionist Trilok Gurtu and drummer Dennis Chambers, both longtime John McLaughlin collaborators. Each independently recommended Mondesir to the guitarist, who was suitably impressed and asked him to contribute to his 1996 CD “The Promise”.

One day, I got a call from John inviting me to London to play on a track called ‘Django,’ recalls Mondesir. Then he tells me it’s a collaboration with Jeff Beck—their first since they toured together with Mahavishnu Orchestra in 1975. So, I find myself at the studio with John to my left and Jeff to my right. It was unbelievable to have two of my favorite guitarists on the same session I was part of. It was also magical because John’s music has had a major impact on me. I’m a harmony freak and love John’s unique use of chords. I also really enjoy how some of his tunes have a counterpoint thing happening in which there are two melodies and a superimposed time signature. I took to that stuff like a duck to water because I have the rhythmic equivalent of perfect pitch in that I can work out rhythms and time signatures in real time. So, I intuitively understood how John makes his compositions work, which made working with him a great pleasure.

With Mondesir also having collaborated with the likes of Larry Coryell, Kevin Eubanks, John Scofield, and Mike Stern, McLaughlin and Beck were clearly in good hands. I’ve always said if I wasn’t a drummer, I’d be a guitarist,” says Mondesir. I love how so much can be expressed with one note on one string of the instrument through vibrato and harmonics. I also enjoy how chords are voiced on it. The guitarists I’ve worked with have taught me a lot about music. It’s been fantastic learning about their individual approaches to the instrument, where percussion fits into it, and how the two components can work together seamlessly. McLaughlin once again sought out Mondesir to join him on sessions for his 2006 fusion tour de force “Industrial Zen”, which led to his involvement on this tour. John provided me with a great deal of inspiration when we discussed his expectations of me for these gigs, says Mondesir. “Based on our conversations, the rhythmic component of this tour will represent a real culmination of John’s past bands. I won’t be a carbon copy of any of his previous percussionists, but expect to hear influences from Tony Williams, Billy Cobham, Zakir Husain, Narada Michael Walden, and the drum and bass scene in my playing. John has given me a lot of freedom to express myself. It’s going to be a fantastic experience.

He’s equally enthusiastic about the high caliber of the bandmates he’s sharing the stage with. Hadrian Feraud is an ideal bassist for John because he has a lovely flow in his feel, yet he’s totally solid in his groove and has a great sense of harmony, says Mondesir. Gary Husband is also phenomenal. He’s someone who equally qualifies for membership in John’s band both on keyboards and drums. I’ve been a big fan of his for a long time. We all know that John loves drums, so what better keyboardist for John than one who is also a master drummer? It wouldn’t be a McLaughlin tour without the guitarist ensuring his musicians are pushed to their creative limits. Mondesir relishes the opportunity to further expand his musical horizons.

The biggest challenge for me on this tour is adapting the Indian konnakol rhythmic system into my own playing, says Mondesir. The system involves counting, which is something I never do when I play. I see rhythms and song forms as shapes, rather than bar lines or numbers, so as soon as I learn something, I never get lost. Konnakol is a very different way of thinking for me, so making that work will be a very interesting and educational experience. Mondesir is also well aware of and embraces McLaughlin’s spiritual inclinations. In particular, he shares his perspectives on how music at its best involves reaching into realms beyond the physical.

I’m very much into that which is termed as ‘spiritual’ and I’m a great believer in the power of manifestation, says Mondesir. “If you focus on something long enough, it tends to materialize. I’m living, walking proof of that. It was clear to me that John seemed to tap into something beyond his consciousness to play so incredibly well. It’s something I experience too. Like a drop of water in the ocean, I become a fluid part of the music. I feel ideas and my limbs go where they may to create sounds without physical effort. To say music moves me in a very deep way is an understatement.