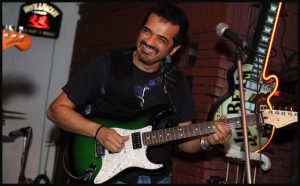 For those of you who are finding out about Ehsaan Noorani, for the very first time, he is one of the finest composers of Indian Film Music often termed as Bollywood, a mammoth machine that churns out big movies quite so like Hollywood, if not more. However what sets the two film industry apart among many things, is the music score that is as integral to the movie as the movie itself. In fact in a lot of cases, its the music score or the songs that determines the success of the movie.

Ehsaan is one-third of India’s most celebrated composing outfit, SEL (Shankar-Ehsaan-Loy), yes you guessed it right – it’s the same Shankar (Shankar Mahadevan), the magical voice of Remember Shakti who have enthralled audiences all over along with John McLaughlin, Zakir Hussain; the other third of the trio is Loy Mendonsa an industry veteran who have been a big part of jingle scene in India for many many years.

Incidentally, Ehsaan graduated from Musicians Institute in MI in the mid eighties and studied with Scott Henderson & Robben Ford among others.

An extremely humble individual inspite of selling millions of records through his music in films, Ehsaan is a perpetual learner, a big music buff and an avid blues music lover, always keeping his ears and eyes open to music everywhere, especially his favorite guitar players- Robben Ford, Michael Landau.

I recently caught up with Ehsaan as he prepares for his first American Concert Tour with Shankar Mahadevan and Loy Mendonsa along with eight other musicians.

Abstract Logix: For those of the readers who are reading about you for the first time, tell us about yourself?

Ehsaan Noorani: I am a guitarist / composer. A blues guitarist and a composer of music for films here in India. I also compose music for advertising films and other corporate stuff .I am one third of Shankar Ehsaan Loy .

AL: I have read that you started off in the ad / jingle scene in Mumbai, can you let me into that world?

EN: Well, when I got back from the US where I studied at MI (Musicians Institute, LA) I was completely lost as to what I would do in India , luckily there were openings for studio guitarists in the advertising studio scene in Bombay . I began working with all kinds of composers and worked with Louis Banks for about a year . Then I began composing music for advertisements in 1989 and luckily haven’t looked back since. I have composed music for all the major brands like Coke, Pepsi, Uniliver, Procter and Gamble etc.

AL: I know you were in MI, which years were those and tell me how they contributed to you as a guitarist and musician?

EN: I studied in MI from March 1985 to March 1986 it was one of the most precious years of my life .That one year opened up my mind not just as a guitarist but as a musician and songwriter . One expects to got to MI and come out a hot shot guitarist but it actually depends on your mind set and how open you are to music. I learned about all forms of music and of course I heard Robben Ford and it changed my playing style forever .I was into blues always, but after listening to him, my whole perception towards blues changed. . I love his playing even now, that year at MI made me more adaptable and evolved me to take a holistic approach to music.

AL: How was your practice schedule during the early days during GIT or even after you returned to India … How do you practice today?

EN: Most of my days at GIT were spent in class it involved class rehearsals and jamming. After I got back to India I started thinking about what I was playing and realized that it was not good to be academic about ones playing and eventually it is important to discover your own sound. However a lot of my learning at GIT found way into my song writing and literally opened up my mind and helped me in composing.

AL: Lets talk about the role of a guitarist in the film industry of India?

EN: There was a time when there were quite a few studio guitarists in the Bombay film industry. A lot of them had to resort to programming and keyboards in addition to playing guitar in order to make a living or else the programmers would take over. Producers and film makers wanted to spend less unlike the lavish recordings of the 70’s and 80’s. As a composer and guitarist I have played a lot of guitar in our songs that we compose for films. One of our latest film “Rock On”  have brought guitar to the fore front. You get to hear a lot more guitar now but it’s not like the older days when a guitarist was always on the studio floor playing in the ensemble.

AL: How does guitar as an instrument contribute to your compositional side.. Do you use any other instruments to compose?

EN: I do compose a lot on guitar and I do play some keyboard and do a little bit of programming but most of it is textural and production oriented. I find that I compose the best, when I compose without an instrument, that way my mind is totally open to creativity and new ideas flow in freely irrespective of harmony or anything.

AL: When you say that your best composing is without a instrument, do you normally sing melodies or phrases in your head and then write it down?

EN: Well, I sing out the melody and normally record it on my mobile phone and store it, unfortunately my writing (notation) skills are not very good, I wish I had worked more on that.

AL: How does SEL compose? Tell me from scratch, when a project comes to your plate, how does it work?

EN: We jam like any other bands do. Then we start off with a brief from the filmmaker and of course listen to the film script first. Then we get together in the studio and jam on ideas sometimes a snippet of a melodic idea or a little guitar riff or even a groove anything can be a trigger. We run pro tools all the time and keep recording our ideas irrespective of good or bad. After that we piece the melody together and do a rough production of the tune . Shankar puts down dummy lyrics and then the songwriter writes the lyrics to the melody given to him. We then record the main vocals and then add live instruments, which may be Indian ethnic or orchestral, or whatever would fit the best. I re track my guitar parts and Loy incorporates his synthesizer and piano parts. It’s an effective working method and with 3 minds its very interesting because the music turns out very eclectic.

AL: Do all three of you orchestrate everything or do you guys have anyone else help out in the various orchestrations ?

EN: We ourselves do mostly all the orchestrations, occasionally we use a second programmer to help with background scores. We have a couple of people who does music copying for us so that we can present it to the string players etc. With logic 9 it becomes very easy to take print outs of the score but even then one does need the human touch to make sure that the range of the instruments are correct.

AL: SEL is about to come to USA for a tour. For someone that might not be hip to the music, what is it in for them?

EN: We will be performing a lot of our hit songs from our different films like “Dil Chahata Hai”, “Kal Ho Na Ho”, “Rock On” etc. we perform with a lot of energy and Shankar is a great live singer.

AL: What guitars are you taking out on the road this time?

EN: I am taking a Parker fly mojo and a Godin multiac steel. I will also be visiting the Fender factory to see their work on my signature model, which will be launching in India soon.

AL: I believe you are a collector. Which are your most cherished guitars that you own?

AL: India has always been known for the rich musical heritage mainly through classical music. What do you have to say about the contribution of film music?

EN: Film music fortunately or unfortunately is the highest selling and the most popular music in India. Fortunate cause one can make tunes which are mega film hits and enjoyed by the masses, unfortunate cause it has cornered the music industry completely any other forms of music like rock, jazz, blues which are non film based do not get promoted at all. Record companies concentrate mainly on film music and do not spend money on promoting non-film music. On the other hand film music has introduced many global forms of music also like rock and hip hop, rnb , techno etc to listeners as nowadays film composers have incorporated these styles into film music also.

EN: Well there have been small collaborations like for e.g. composer Wayne Sharpe recently composed for a Bollywood film called ‘ “Rajneeti”  which was very well received. Some of the intellectual rights laws in India may turn off composers from the West cause over here the producer keeps all the rights to the music and then passes it on to music companies. But the Bombay film industry is wide open and has many other avenues of collaboration.

AL: I just found out that the composers in India don’t get to keep any publishing or mechanical royalties of their music? is that true ?

EN: Yes it is. In India we do not get any royalties on our music, it is a sad state of affairs and hopefully the laws will change soon in our favor.

AL: I believe that SEL is writing music that is not going to be part of any film but more like a music album. Can you let us in on it?

EN: Yes, it has been on the cards for a long time we have songs that we have put into cold storage and soon as we get a comfortable time window, we will start working on it .It will be eclectic in sound and style .

AL: It seems that there are a few really great young guys playing guitar in India. Anyone special ?

EN: Yes, there is Sumit Ramachandran, Saibal Basu, Amyt Dutta and many more who are hidden away .

Thanks Ehsaan, Wishing you and the band great success on the American Tour.