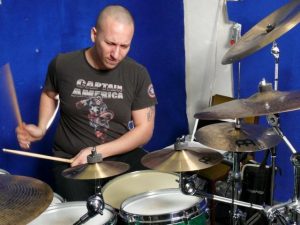 It was almost a year ago when keyboardist Scott Kinsey informed Souvik Dutta, the founder of Abstract Logix about Hungarian Drum Sensation Gergo Borlai.

Borlai was on drums when he was three years old when he heard Harvey Mason and Joe Morello playing Hancock’s Chameleon and Brubeck’s Take Five.

He was accepted into a music school at the age of six performing these songs they were quite impressed by his improvisational skills. He used to spend all his time to music, especially the music of Weather Report, Frank Zappa, Miles Davis, Allan Holdsworth, John Scofield and John McLaughlin.

Borlai has finished recording with Scott Kinsey and Gary Wilis, A38 Trio which is scheduled to be released on Abstract Logix in 2012. Drummer Chiradeep Lahiri, originally from Calcutta, India spoke To Borlai about his past, present and future

Chiradeep Lahiri: To start with it’s a very impressive album. What’s with the name “M.M.M” ?

Gergo Borlai: When the company Meinl became a part of my life, something new began in my carrier, the world started to recognize me. Right after the debut on Meinl’s and Drummerworld’s website (as the first hungarian drummer so far), Norbert Seamann (Meinl artist relation manager) invited me to the Music Messe in Frankfurt. I did put a play along material together to play with. I realized afterwards, that this was basically a complete record, and i should record it. Because it was for Meinl, M.M.M. means “Music, Meinl, Messe”.

CL: Would be nice if you could say a few words about your background …things like where & how you started & what made you become a drummer.

GB: Started to play drums at age 3, inspired by Joe Morello and Harvey Mason, Take Five and Chameleon was a huge effect. My dad (who is a sound engineer) had a band, so there was a drum set around. Somehow it was natural, the first tune I played was Take Five, and to improvise in 5/4 got me really into it. At age 6, I started to learn the basics, from 12, I started to learn on my own, and started to play with Hungarian lead musicians in every kind of style. I played around 150 records with them.

CL: Who are your influences ? Could You name your favourite top 5 drummers ?

GB: Billy Cobham and all the Mahavishnu records with him were the biggest influences on my play. Vinnie Colaiuta. Frank Zappa’s “Joe’s Garage” had a huge influence as well at age 9, slowly began to learn all the Zappa records, and became a huge fan of Vinnie. His work with Zappa is still the best I heard from him. Maybe the “Secrets” with Holdsworth is really close to that. Terry Bozzio. Also coming from Zappa’s music, but I can mention his solo carrier as well. Dennis Chambers, master of the 16th groove. Kirk Covington. A great guy and an unbelievable musician, can not compare to anyone. The sensibility of his musicianship and his unique thinking in music is almost fathomless.

CL: Interesting interpretation of the waltz groove in the track Alien vs Waltz. Its got a modern twist. What do u have to say about that ?

CL: You seem as much at ease with odd meter signatures as 4/4 judging by the way you’ve played the track Week….How do you do that ?

GB: I never count while I am playing, I just feel it. If someone needs a metrum I do not have, than I count once in my head, and never again. I think counting kills music. And of course, thanks to Zappa, playing in odd is not a problem. And I’m also a big lover of traditional Indian music.

CL: How did your collaboration with Scott Kinsey, Matt Garrison & Abstractlogix come about?

GB: My friend Miklos Mester (promoter) invited Scott Kinsey’s projects, Scott Henderson and Mike Landau a couple times, and when they had a gig I also played as an opening act. It was cool to hang with those guys in the backstage, and get to know each other. It was obvious to ask them to record with me. Our trio with Willis and Kinsey just recorded some new material, and Scott mentioned Abstractlogix, which is a great company.

CL: I gather you’re a self taught bass & piano player as well….could you elaborate ?

GB: I work quite a lot in theaters and with film makers, also arrange and write for others, so I had to use keyboards a lot. Can not play on the piano, but quite familiar with electric keyboards and computer programming. Bass is just simply the best instrument ever, so I have to play on that, but it is only for my entertainment.

CL: Your style of playing involves a lot of precision timings, have you consciously developed that or does it come naturally to you ?

GB: It was always a goal to play clean and precise, so I practiced a lot with thick sticks and on uncomfortable drums, so it was way easier later. Probably the fight with the pillows in the living room in the early years not to kill the neighbours helped a lot as well to have some real power.

CL: What gear do you endorse?

GB: I do endorse Meinl cymbals now, which is fun and they help me a lot. I do not have an endorsement with any of the drum companies, but of course I am open for that.

CL: Barbarian Barbie is an awesome track. What inspired you to write it ?

GB: Tamás Barabás, a friend of mine, who plays bass on this tune inspired me to write this one. We could not play much before, so I had to write something to get this done.

CL: One final question, what are you working on now ?

GB: Just finished a quite big job in a theater and also some music for a movie. Of course I have gigs with my band, going to have a couple with my friend Hadrien Feraud and looking forward to have the record with Kinsey and Willis in hand. This I really would love to show everyone live on stage.