Books about Jazz tend to be either encyclopedic lists, biographies of one of the great exponents of the art or histories of particular events in one of the many strands of style clustered under this one word. You probably wouldn’t read them unless you were a musician yourself or doing educational research.

Thankfully none of the above applies to this delightful read, being a collection of short stories, imaginations, ruminations and illuminations on the subject of Jazz, broad enough for a complete novice to forge an entre to the subject, while having sufficient meat on the bone to satisfy the most wizened and knowing member of the local Jazz Society 411.

Kolosky has his life’s experience of Jazz to call from, having been both a DJ and journalist in the genre and his knowledge of the subject informs without lecturing, offers ideas without dictating and above all seeks to entertain the reader with sufficient variety and bon homme while approaching a serious subject, namely the decline of what he sees as America’s primo exported culture marker.

From the provocative title and patriotic red, white and blue cover to the pictures of jazz albums that have literally scared people half to death on first hearing, what we have here is primarily a work of non-fiction, peppered with humor, real and semi-real facts, (and with some outrageous liberties taken with them too), in which Kolosky weaves the imagined into the real, the possible against the probable and the down right fallacious with the serious point of view.

If this book is anything to go by, whatever Jazz is, it appears that it can be serious, funny and entertaining all at once. Fans of the genre will find hidden jazz info, somewhat akin to Frank Zappa’s secret word of the day ploy, while those who don’t know their Coltrane from their Moontrane will find plenty of amusement within this accessible guide.

Here is a coffee table-top mini-treasure trove of anecdotes that can be dipped into for a quick 16 bar solo, or perused at length for a more complete jazz workout. Funny and thought provoking in turns, its trajectory is diverse enough to entertain both hard-bitten aficionados and flighty dilettantes.

This book serves equally well as a user-friendly intro, a topic of conversation and debate or brain food for the more seriously minded thinkers in the jazz fraternity. It may turn out that girls don’t like real jazz, but anyone should find real entertainment in this book.

Recently this Englishman asked the author a few pertinent questions on the hotline between Jazz City USA and JazzCentral UK:

WK: That is a trick question. I will not answer it for fear of damaging my marriage. But seriously, I don’t know quite why. The point is that real jazz needs more women fans. Women are the engines of our economy. If the jazz world can find a way to mine this market there would be no need for such a book as “Girls Don’t Like Real Jazz”.

MA: What is real jazz?

WK: I quote former U.S. Supreme Court Justice Potter Stewart in the book. He once said, I don’t know how to define real jazz. But I know it when I hear it. There is jazz and there is real jazz. To me, almost any form of improvised music can fall into the jazz category. I know this encompasses a lot of old and new musical traditions that make purists uncomfortable. But we live in a world in which many musical forms have merged and created new styles that are hard to deconstruct. What separates real jazz from jazz, in my opinion, is the degree of risk that is found in the music. I am specifically talking about the risks taken during improvisational aspects of the music. The higher the perceived risk the musician takes- the more obvious it is that you are listening to real jazz. There is no clear demarcation line. It is really up to the individual to decide what real jazz is. That being said, I want to make it clear that 99% of the time you can pick out real jazz from its bastard offspring- Smooth Jazz, which is devoid of all risk.

MA: There’s a lot of fun to be had in the book and I for one would particularly relish the Jazz Boxing concept you propose. I would especially be interested in the bout between Kenny G and Pat Metheny. But do you really think the sight of jazz drummers Billy Cobham and Dennis Hatman Chambers battling it out for 8 rounds would attract more people to listen to jazz?

WK: Jazz boxing is one of my plans to help save jazz in America. This is about reality TV programming– which is all that people watch in America these days. But, no I don’t think that particular bout by itself would attract a much larger audience for jazz. That is why I place it on the under card of the Metheny-G match. We need a few key fights for every boxing show to attract an audience. I also think that there is no way that the fight would last 8 rounds! Since I have written the book I have had the additional idea to group the jazz boxing show with one of those plastic surgery programs. Basically we would have a follow-up series that focuses on how plastic surgeons repair the damage to the faces of the jazz stars after they have been cut, bruised and battered. That way we get to control the TV franchise from the infliction of the wounds to their repair. I think it is a money-winner all around.

MA: Why is it important that jazz survives in terms of its cultural marker for the USA?

WK: Well, it is important to me. Whether it is important to thousands of other people– I don’t know. I hope it is- so I can sell a lot of books. It seems to me Marco that although America is young in comparison to the other countries of the world, we have offered our fellow travelers some important cultural markers- to use your words. Among the most joyful has been jazz music. It is an art form that has almost been universally accepted. I may not have a say in any other decision our government ever makes. But since I am in this jazz community, I think it is my duty to promote this music as one of the good faces that my country can present to the world. Historically, American jazz has been good foreign policy. Through jazz, the American spirit helped develop a way to help make things more pleasant for anyone in the world who would listen. You can count me as one of those people who admires any artist that wants to open his or her soul to try to communicate. I think that is a good thing and we have plenty of those people who need to be supported. The fact we in America are turning our backs on our own artistic gifts to the world is un-American.

MA: Smack dab in the middle of this book you turn real serious on us with a rather graphic story about a jazz murder.

WK: Well, I think it is made clear on the book flap that not every story in the book goes for laughs. But, I would also say that I view that particular chapter as dark humor. If you read it as if you were viewing Hitchcock’s movie “Frenzy” you may get a couple of chuckles out of it. But the greater purpose of that story is to show just how seriously some of these jazz musicians can take their music. Some just take it way too seriously. It can be unhealthy- especially to a murder victim.

MA: At 186 pages including some unusual graphics, the book is a quick read. Had you thought about expanding the book to include further detailed analysis of the problem?

WK: I purposely wanted a quick read. The book is a call to action- not an intellectual exercise. I was interested in bringing the issue to the attention of as many people as I could. I thought long and hard about what kind of package this book was going to be in. In the end, I decided I wanted to present a how-to-save-jazz guide book that would point out the problems facing jazz music in America. Then, in a creative and lighthearted way, talk about how to fix them. By its nature, I don’t think a guide book, especially a patriotic one, should weigh more than one pound. For the record, this book comes in at just over 14 ounces. In fact, my editor discarded text based solely on the weight of the book- not the quality of the material.

MA: You have a very interesting story about a dog that sings jazz. I must say I find it hard to believe.

WK: I don’t know what to say except that there are facts in the story that can be verified. So I guess people can come to their own conclusions based upon their research. And if you remember, I actually ask for the help of my readers in tracking a few things down.

MA: There’s a great interview set in the future with the last jazz musician called Loppy 7. His performances can only be heard through some kind of future internet site. Do you see this as being the outcome of the present decline in jazz as a live event?

WK: I certainly hope not Marco. But I am afraid that it may be the case. The trends in today’s society, and again I address the American trends, seem to start on Monday and come to fruition by Friday. I think it is a real slippery slope we are on that ignores American art in favor of the crass commercial opportunism that American business has become. I mean I think it is no accident you won’t find a real jazz section at a Wal-Mart. I am not above some crass commercialism myself, however, and would like everyone to buy the book so we can show Wal-Mart who the real boss is.

Marco Anderson is a well-known and accomplished English jazz drummer and guitarist. His latest efforts have been on Surinder Sandhu’s Saurang Orchestra with Steve Vai, George Brooks and others and Paul Dunmall’s Present Tense. Read more about Marco Anderson athttp://www.foxyproductions.co.uk/ 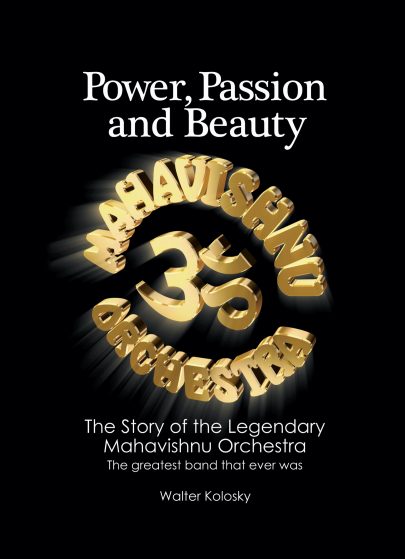 Walter Kolosky From 1971 to 1976, the Mahavishnu Orchestra forged a controversial new musical direction. The loudest and fastest band