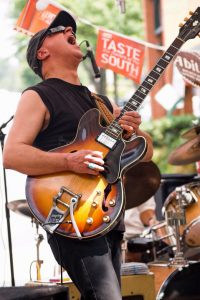 …a player of this caliber could easily break into the national spotlight at any given moment.
Mike Childree, Charleston Free Times

A hot player whose music I highly recommend.
Eric Johnson

Lest you don’t know who guitarist / composer Barry Richman is, read that last quote again and especially note who said it. That’s right. Richman is the Real McCoy. A resident and in-demand player in Atlanta, GA’s vibrant music scene, Richman continues to build national momentum for himself. His guitar playing is soulful without being clichéd, chops driven without being too technical, and imaginative without being commercially pandering. He’s like Goldilocks and Three Bears: not too hot, not too cold, just right. Here is an abbreviated list of the stellar players with whom Richman has already performed or recorded: The Allman Brothers, Gov’t Mule, Eric Clapton, Les Paul, Buddy Miles, John Lee Hooker, Mike Gordon & John Fishman (of Phish), Little Feat, Derek Trucks Band, Lynyrd Skynyrd, Shawn Lane, Col. Bruce Hampton and many more. Hence, the money is on Richman becoming a household name with guitarists within the very near future. And rightly so. Abstract Logix had the pleasure of interviewing Richman via email in mid-October.

Abstract Logix: You mentioned in an online interview on your website that you “hate traveling.” How does / has that impacted your career? Seems you almost have to tour to earn a living in music these days, so how compensate?

Barry Richman: It’s really not a problem. With the high cost of gas and hotels these days, the band does better to play around Atlanta.

AL: What don’t you like about traveling, per se?

BR: I guess I get tired of sitting in a van for hours and there’s never time for a decent meal and a shower before the gig. Aside from that, I really do love playing new places and meeting new people.

AL: I thought the following comment you made in your online interview was especially profound: “After many years of developing my technique and learning theory, I think I’m finally able to find those notes and sounds at the exact same time that I’m hearing them in my head. Then it passes through my heart to my fingers. It’s an incredible feeling, and I hope the people in the audience can feel some of that while they’re listening. If you listen closely, you can hear words coming out of the guitar.”

AL: Did that happen automatically for you or what something that you actively strove for and practiced? What advice do you have for others who are looking to integrate the left-hemisphere /  theoretical aspect of music with the right-hemisphere / heart of music?

BR: I think that comes about automatically for musicians. I never made a conscience effort to get to that point. It goes back to that old saying: First learn your instrument, then forget all that stuff and play. Wish I could say there is a shortcut, but it really boils down to spending a lot of time playing. Eventually, you and your instrument become one.

AL: Tell me about some of your early training. Did you have formal music education? Self-taught? Private teachers (if so, any body whom we might know?)

BR: I’m pretty much self-taught but I had a wonderful guitar teacher, Sigi Alan, when I first started playing. He tried to teach me how to read music, but I never got the hang of it. He would give me books of Broadway show tunes and I hated it. Instead, I would learn solos note for note by slowing down the speed on my turntable. Music by Jimi Hendrix, Django Reinhardt, Cream, Wes Montgomery, Jeff Beck, etc. Doing that really helped develop my ear.

AL: I hear some Aquarium Rescue Unit influence in your compositions and a similarity to Jimmy Herring in some of your guitar work. Intentional?

BR: I love Jimmy and A. R. U. but I think any similarities would be because of mutual influences: guitarist such as Steve Morse and Scott Henderson. And also, Jeff Sipe was playing drums in my band before he joined A. R. U. and for a short time, Oteil Burbridge was on bass. I think just being around each other in the same city has something to do with it. I guess that’s why some cities develop a characteristic sound, for example New Orleans, Memphis, Nashville, and Austin.

AL: When you’re playing with Jimmy, as on “Back Door # 4” with two great guitarists on the same track, how do you guys communicate? How do you ensure each of you has his own “say” without getting into each other’s way? Do you think / play differently when he’s on board with you?

BR: Being a musician is all about communicating, with each other and with the audience. It’s as natural as having a conversation. Jimmy and I have always had a great mutual respect for each other and we have a total blast playing together. I can’t help but be inspired when I hear him play.

AL: Your guitar collection is awesome; I’m jealous. When you tour, which guitars do you usually take on the road?

BR: Well, I’m up to 35 guitars now, so sometimes it’s hard to decide which to take with me on the road. I usually wind up with one Fender and one Gibson. Now that these vintage guitars have become so expensive, I wind up leaving the most valuable ones at home and save them for using in the recording studio. Same with my vintage amps. I’ve had my equipment stolen out of my car twice. And I’m also reluctant to try flying around with one of those vintage guitars as well.

BR: It’s an original tiger stripped sunburst with Patent Applied For pickups. Plays like a dream and sounds amazing! That guitar has a lot of soul.

AL: I see you do some teaching. Is that a significant part of your music career? Do you only teach advance students or do you also teach beginners? What materials do you use when you’re teaching (not necessarily books, but what approaches to music learning/making to strive to instill in your students)?

BR: I have time for about 5 to 10 students a week. It helps out in between gigs. I teach beginners to advanced professional players. I don’t use any materials or books; the lessons are geared towards each student’s musical goals. I teach them that everyone has his or her own unique style and voice on the guitar. I try to help them find it. I also make certian to encourage proper technique and good practice habits. There’s so much more to it than just learning scales and picking fast.

AL: I read on your website where Les Paul invited you to play with him. What was that experience like?

BR: Les is without a doubt one of the greatest guitarists – ever! I can’t even begin to tell you how much respect I have for him. It was an honor to be on stage with him and his trio. I brought my ’58 Les Paul with me to N.Y.C. for that show. We spent an hour talking to each other back stage.

AL: Tell me more about this live DVD that you’ll soon be recording. What players? What venue? What stage of production is it in?

BR: We did a three camera shoot last year at The Masquerade in Atlanta with my current band: Kari Connolly, Bill Diehl and Jeff Haley. Unfortunately, due to technical difficulties, the audio was out of sync with the video, and I can’t release it. It’s like watching a foreign flick with the voice and mouth moving at different times.

AL: Atlanta strikes me as being — and it’s been so for quite some time now — a real hot bed for original music, as well as sporting great musicians. Is that still true? What’s the scene like for you up there?

BR: It’s a very healthy music scene here. Atlanta doesn’t quite have the same musical soul as say N.Y.C. or Austin or New Orleans, but it’s a beautiful city to work in. I stay busy with gigs and studio work.

AL: BTW, you have very well laid- out, informative and fun-looking website. Congrats! Lets encourage everybody reading this to go check it out. Even the Links page is impressive.

AL: Walk me through the songs “Jazz Noise 1-4.” What cool solos you’re doing! Great tone, too. Why did you decide to include them as just song snippets?

BR: That was actually about a four-minute jam that had a couple of glitches in the recording that we couldn’t repair. So, instead of throwing the whole track away, we edited it into four little pieces and placed them in between some of the longer tracks.

AL: Ditto re: “Get It While You Can,” which features a great, funky shuffle groove. It also has a great solo, especially that very brief wah-wah phrase. I’m eager to hear you in concert.

BR: A lot of times, I wind up writing songs on the spot, live on stage or in the studio. I’ll start a rhythm groove and throw some chord changes or a lick at the band and everything falls into place. I’ll do the same thing when I’m soloing. I make up a groove on the spot and take it from there. It keeps the live shows sounding fresh. Even the songs that we play every show turn out a little different every performance. I hope you can catch one of our shows next time you’re in Georgia. I think I do my best playing live.

AL: Tell me about how you compose, develop your solos, etc.

BR: I like to start out writing a chord progression first. Then I decide if it’s best to have my songwriting partner/producer, Paul Kelly, add lyrics or keep it as an instrumental. To me, a good solo tells a story and is similar to a paragraph in literature. It starts with a sentence and the following sentences relate to the previous ones. This can be achieved both rhythmically and harmonically.

AL: When I’ve previously spoken in depth with Oteil Burbridge, he talked about how playing w/ Col. Bruce Hampton really challenged him as a musician in ways that were “outside the norm.” What have you learned from playing with Col Bruce?

BR: Playing with Bruce was definitely a learning experience. He has a way of getting you wander outside of your box. Then he locks the doors and eats the keys. (LOL.) It was a lot of fun playing with him! We’ve been great friends for many years.

AL: That’s a wonderful cover version of The Allman Brothers’ “Whipping Post.” It’s very imaginative. Is that very different groove something you came up with? Admittedly, that’s one of my favorite tracks on your new “Blues from Mars Vol. 1”.

BR: That was inspired by a version I heard on a Greg Allman solo album. I’ve only heard that particular version one time, so I’m not really sure how similar ours is to his. I think we’ve expanded on the arrangement a bit. Personally, I always think that when I do a cover of someone else’s song, I want to add my own personal touch, instead of playing the original note for note.

AL: If there is any thing else you’d like to add? If so, go for it…

BR: I am so appreciative of the people out there that love real music played by real musicians. As you well know, mainstream media is engulfed with commercial music and very little artistic or sincere, heartfelt music ever gets any exposure. I want to thank all the cool people out there that support the art of creative and improvised music! I love hearing from all of you. Please feel free to write me through the Contact page on my site: www.barryrichman.com.