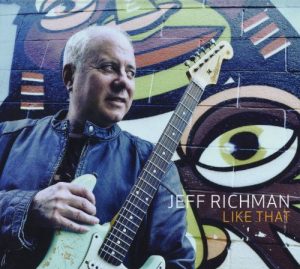 Jeff Richman Interview : The Line Up

Guitarist Jeff Richman’s latest album “The Line Up” has him reuniting with his bandmates from Chatterbox – Richman’s 2005 project which combined elements of west coast jazz with a more jam-oriented focus. Featuring Dean Taba on bass, Joel Taylor on drums, and Mitch Forman on keyboards, the group has an obvious cohesiveness and chemistry that remains as palpable now as it did 6 years ago. In other words – this quartet sounds like a real “band,” which is not always the case when top-shelf cats such as this get together to record.

“The Line Up” includes a collection of Richman originals, plus three band improvisations, all of which showcase the group’s impressive chops and musicianship with a fun, easy going vibe. I asked Richman about the new album, the Chatterbox band, and more.

Abstract Logix: You haven’t recorded with this band in some time. What led to the decision to do another album with these guys?

Jeff Richman: Well I am close friends with all of them and do play with them frequently in various settings. We did do two gigs as a band towards the beginning of the year. We played at The Baked Potato and at Alva’s Showroom (which by the way, there are some Youtube clips from). It felt so good and comfortable with these guys that I made the decision that my next recording project would feature this band “Chatterbox.

AL: How did the band first come together for that first album in 2005?

JR: One of my past students, liked my music and guitar playing. He decided to finance a recording for me with my favorite players. So I chose Dean, Mitch and Joel to record the first “Chatter” CD, an album which I still really proud of!

AL: Describe the difference between the Chatterbox band and material, and what you do in your solo projects.

JR: Honestly, its not too much different. This is a solo project but it is exclusively with one band which happen to be my favorite guys. You could say that it has more of a “band sound,” a very comfortable and ready to take chances at any moment. The three “jams” on the record show how we just we interact so well together.

AL: Did you write the songs for “The Line Up” with the Chatterbox band in mind?

JR: I just write songs, I had a bit of a blues theme in mind at one time, but it morphed into something else. I decided to put together this Chatterbox CD knowing that my songs would be played superbly. However, I play these songs with different configurations as well with great results.

AL: The album has a fun, loose vibe – especially on tracks like “Rule of Thumb” and “Hat Trick” where you venture into blues territory. Is that a natural by-product of the band? Or did you tell the guys to keep things loose.

JR: Since we are all so comfortable playing together it just organically is loose. The improvisational aspect is heightened and intensified. We all have such a rapport with one another that taking chances is the name of the game!!

AL: There are three improvised jams on the album – “It’s All One,” “Square Root” and “Right Here, Right Now.” How did those pieces come about?

JR: I just started playing a riff in the moment!! NO preconceived ideas, and that is what happened!! First takes, no overdubs, just pure band improvisation. We did that on the first “Chatterbox” record as well for four songs. That is what I believe is particularly unique about the four of us…..it just happens organically!

AL: Did you record other band jams that were left on the cutting room floor?

JR: NO! We just played those three jams, first takes…no looking back.

AL: I thought “Cross My Heart” was going to be another pure studio jam as well until it morphed into this swinging jazz piece. Tell me a little about that track.

JR: That “free” intro was just an impromptu, last minute idea. The band started jamming freely and then we slowly started the groove up to “Cross My Heart.”

AL: “Point of You” is a bit of a departure from the west coast jazz sound you are normally associated with. There’s a prog rock vibe there, especially in the odd time riffs, and even the melodies which have a soaring, almost Steve Morse-like flavor. What can you tell me about the origins of that tune, and what you were going for there?

JR: I put together two different ideas together on this song. The intro and outro is an odd time signature line which is very hard to play….even harder for Joel to solo over, but he manages to take a fantastic solo at the end. The other part, or middle of the song is kind of a bit of o rock anthem. I stuck the two parts together and it seems to work.

AL: You get pretty adventurous with your tones on this record, particularly on the jam tunes. The first Chatterbox album had some wild guitar tones also. Is it fair to say you have a different approach to tones and effects with this band than you do on your solo records?

JR: Those weird tones are on the jams on both albums. It just felt right to use those various pedals on the jams….it kind of fit in perfectly, it was my voice in the band. Some of the pedals I used were a Mogerfooger, octave pedal, tremolo, Octavia and a backwards delay.

AL: What other gear did you use on the album?

JR: I played two Fender heavy relic Stratocasters, a Fender heavy relic Telecaster and a Sadowsky Jim Hall model guitar. I used a Marshall Silver Jubilee Amplifier miked by a Royer microphone. I have various pedals as well, besides the ones I just mentioned, I use an XTS overdrive, Tube Screamer, Arion Chorus, Exotic RC and EP, Carbon copy delay, volume and wah-wah pedals.

AL: Will you be playing any gigs with Chatterbox in the future?

JR: A few gigs here and there but more than anything, I would love to tour the world with this band!!!