Maestro composer, bassist and engineer Jonas Hellborg is back in 2014 with what he says is his best album yet aptly called “The Jazz Raj”, an exceptional musical statement with Indian undertones featuring Swedish Guitarist Mattias Eklundh and Indian Drum Phenom Ranjit Barot who has been making international news for the past few years as the drummer for John McLaughlin and the 4th Dimension. Not just “The Jazz Raj”, but fans have been treated with a double dose of music from Hellborg with a remastered release of his seminal solo album, “The Silent Life” , originally released in 1994.

AbLx: Jonas, you have had a significant absence from releasing music since Art Metal which was about six years ago. Where have you been ?

JH: I have been working on music, including working on records; I just did not feel ready with anything until now. I do have several other projects that I am working on including a duet record with Selvaganesh Vinayakram. That one we have recorded maybe three times already but I think we will record it again.

I have also built a new recording studio going back to analog tape but taking it to the extreme. For those who understand it, I now have an 8 track 2 Studer A800 and a 2 track 1 Studer A80 (courtesy of JRF Magnetics). If that means nothing to you, I can only describe it as the magic and sound fidelity of tape with the low noise and distortion we are used to from digital. Also I have some electronics in the studio I have been working on for a long time. I am as well in close contact with Rupert Neve Designs. I used some of their EQs and mic preamps on these records and I am looking forward to getting more involved with them and their gear.

AbLx: Your new album “The Jazz Raj” features Mattias Eklundh and Ranjit Barot. How did that come about?

JH: I think that this is the best record I have done so far in my life. That is a popular statement to make as you release a record. I do not think however that I have ever said that before and I don’t remember ever being so content about a record before. Particularly about my own playing on it.

Me and Mattias have been collaborating now for a good number of years. And just like with Shawn, we have tried to expand the vocabulary of bass, guitar and drums as a musical ensemble. A few years back we did a performance of the Beethoven triple concerto with Patrik Jablonski doing the piano part and Hans Ek conducting the VÄSTERÅS SINFONIETTA. We have done duets and trios and all kind of stuff over the years, with many different drummers, just as I did with Shawn.

I guess it is a thread in my musical work, this treating bass and guitar as one grand instrument. It was very prominent in what I did with John McLaughlin and in groups with Shawn, Mattias, and Buckethead. I have also furthered my studies of how to integrate Indian music with western music here for “The Jazz Raj” record, primarily dealing with the opportunities the tonal structure of certain ragas give when treated as western tonalities. Some of the modes we are using have 4 semitones in a row; quite unorthodox for a western tonality, but I don’t think the sound will strike you as odd. It actually gives birth to very beautiful melodies and chords.

AbLx: Did you guys record “The Jazz Raj” live in the same room? Was it a live setup in-studio with some post production?

JH: Me and Ranjit played together in his studio in Mumbai. But then I replaced bass tracks as the compositions evolved. That happened over several years. Me and Mattias met several times and worked long distance as well for the recording of the Bass and Guitar and working out arrangements, solos, etc.

AbLx: What qualities did Ranjit bring to “The Jazz Raj” sessions?

JH: Ranjit is exceptional in the sense that he is a western drum kit player (even though he is Indian) who has a full grasp on the Indian rhythm knowledge and wisdom. When he plays his implementation of the Indian rhythm ideas are not clumsy as they often are when western drummers are trying to do “takadimi’s”.

The music flows and there is a flow ideas that are indeed native to the drum kit and that fits with what the Guitar and the Bass are doing. This is a record I wanted to do since I first met and played with Ranjit

AbLx: Did any particular ragas provide inspiration for “The Jazz Raj”?

JH: Yes, mainly South Indian ones, I will release a text on what ragas and how they are used shortly.

AbLx: At the same time as “The Jazz Raj”, we get a double bonus from you with the reissue of  “The Silent Life”, which you originally released in 1994. Why did you decide to reissue it?

JH: “The Silent Life” was recorded over three days in December 1990 in the studio I used to own together with Bill Laswell in New York, Greenpoint Studios.

It was basically 3 one-hour performances in the studio, largely improvised. The sound that we created on the record back then was very much of its time with exaggerated low end and a lot of reverb. Listening to the original recordings it just sounded so direct and beautiful without all that processing. Then listening back, I realized I did not any longer agree with the picks of songs and the order they had on the record so I spent a long time just listening and reevaluating the music. In the end I just ended up with the first day’s recording straight-up, only editing out some false starts and noises.

AbLx: How has your playing changed over the years, and where are you musically today?

JH: That I could not tell you in words. I am as involved in learning and playing music as I have been for the last 45 years. It is like human society; there is great change and no change at the same time.

AbLx: A very memorable part of your career is the years with Shawn Lane in the nineties and John McLaughlin in the eighties. How do you remember the periods with those two guitar players?

JH: Two very different situations. I was playing with John doing his music. Shawn was playing with me doing essentially my music. With John I mainly wanted to learn from my hero. With Shawn I had very developed concepts of what the music would be and how it should be played, but that did not happen out of a vacuum all of a sudden. After playing with John, and before the groups with Shawn, I had two trios with bass, keyboards and drums; one with brothers Anders and Jens Johansson and one with Aydin Esen and Kenwood Dennard. I was also heavily involved with western classical music, both transcribing and playing and writing for various ensembles. A lot of the musical direction implemented in the various things I did while Shawn was playing with me came from those projects. And a much more important collaboration for me is my work with Selvaganesh. It is through him and his family I have learned a lot of what I know about Indian Music. See, I was always a great fan of Selvaganesh’s dad Vikku, who was in the original Shakti. And Selva is who ties together the music I did with John and what happened after.

Going back to John, that was a massive experience. I was fresh out of nowhere pretty much playing with a musician I had idolized since I was 14. I was just trying to absorb as much as I could and figure things out. I am very grateful for that time; thank you John!

AbLx: Do you have anything deep in your closet with Shawn Lane that the world has not heard yet?

ABLX: Can you let us in about it ?

JH: I recorded a lot of performances during the time with Shawn. What felt relevant at the time was released on record. If I find something that really adds something meaningful artistically I will release it but as for now I think we have a good representation of the work we did released already.

ABLX: Was there ever anything recorded with you, Shawn and Ginger Baker ?

JH: No never was, I had the intention but it was never possible.

AbLx: We had heard that you might have some music recorded with Debashish Bhattacharya ? Can you give us a peek into that?

JH: That is yet another project that might or might not see the light of day at some point.

AbLx: Tell us about the new Hellborg amp.

JH: Well, there is no new Hellborg amp. That was done 7-8 years ago, so I guess that is not central in my mind at the moment.

Ablx: What is your association with Warwick ?

JH: Hans Peter Wilfer who owns Warwick is a great friend. I have designed a number of Bass Amps for him. In essence the whole range that Warwick sells at the moment are of my design.

AbLx: Are you touring the new record?

JH: Well, see, here my thinking differs from the norm. I release records as works of art, not as products that need promoting. I play concerts as an expression of my art; it is not really a commercial enterprise. So yes, I will play concerts if the interest is there. But it is not for the purpose of promoting a record. Normally for me, the record comes after the tour, as a result of it. Live is where the music is being developed and hopefully recorded. The record is a record of the concerts.

JH: Yes I listen to new music every day and rediscovering old music. As I mature I seem to gravitate to old Masters like J.S. Bach and S. Balachander.

AbLx: Do we ever see you back playing with Jeff Sipe again ?

JH: I would love to play with Jeff again, he is one of my favorite musicians.

Ablx: Thanks for time Jonas. Its great to have you back and all the best for the future. Hoping to see you perform with Ranjit and Mattias 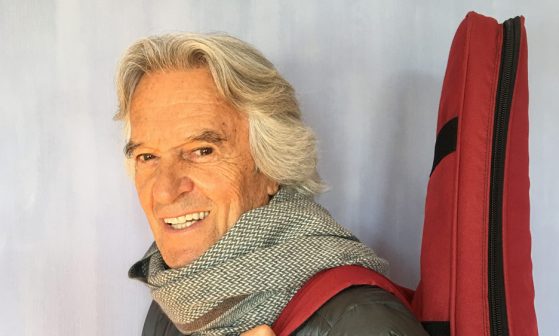