I made a long trek last night to catch Mike Stern’s first set at the Jazz Showcase in Chicago. It was my first time seeing Stern live, and I must say I was thoroughly impressed. He had Tom Kennedy on bass, and Lionel Cordew on drums, both of whom were awesome as well. These guys were seriously locked-in and grooving right from the start. Seeing Stern in a trio setting like this was great, since you really got to see how he can carry the melodic content of the music largely by himself. He relied heavily on chordal melodies and double stops to beef up the trio sound, and essentially drive the music.
This was also my first trip to the Jazz Showcase; a straight-ahead jazz club that has been a staple of the Chicago jazz scene since the 1940’s. The club has changed locations a few times over the years, and is currently located in the historic Dearborn Station building in the city’s Printer’s Row neighborhood. I can’t speak to the previous locations, but I can tell you the current room is a fantastic place to see a live performance. The venue’s iconic founder Joel Segal still owns the club, and greets you at the door when you arrive. Between Segal’s presence, and all the photos of jazz greats lining every wall, the place reeks of jazz history.

Since the club mainly caters to straight-ahead acts, I wasn’t sure what to expect from Stern. While I do consider him to be a jazz guitarist, if you play a solid-body guitar and stomp on distortion pedals like Stern does, straight-ahead jazz is not the first term I would use to describe what you do. Having said that, I wouldn’t say Stern was playing fusion last night either. Though he did ratchet up the intensity of several of his solos by sliding into bendy-blues territory with a high-gain tone, that facet of his playing was kept mostly under wraps in favor of a more traditional jazz approach. Was this a conscious decision on Stern’s part given the venue he was in? Maybe. All I can tell you is, to my ears, it was closer to jazz than anything I’ve heard Stern do since his Standards and Other Songs album.
Though the trio played a variety of material that included Stern originals such as Slow Change (Voices) and Long Time Gone (from Stern’s latest Big Neighborhood), the common thread of the set was the band’s emphasis on groove, and Stern’s great guitar playing. With his chords, Stern covered a lot of space, easily filling out the sound of the trio. And every solo he played was filled with great altered lines, and bluesy inflections. Not only that, the guy is monster picker too; better than I thought he was. Overall, I found Stern’s lines and chordal work to be equally impressive, and equally responsible for the jazz factor in his performance. Kennedy and Cordew were both given plenty of room to shine as well. Kennedy took some particularly awe-inspiring solos that elicited big reactions from the crowd, and Cordew not only dazzled with his own solos, he dazzled on his bandmate’s solos as well, lending seamless accents to their improvisations. Check out this trio if you can. 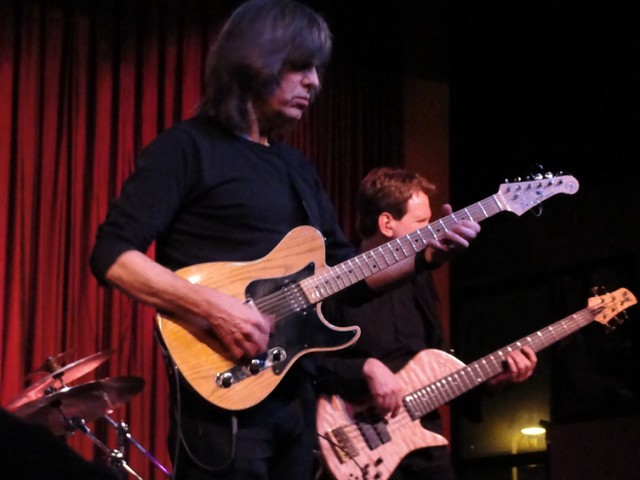