“YOU GUYS ARE F***ING NUTS – THIS RECORD IS AMAZING!” – ALLAN HOLDSWORTH

Virtuosity is more than mere technical prowess: it also consists of a certain creative restlessness – a constant urge to explore, improve, and reinvent. No matter how well refined the execution, true virtuosity withers when repeatedly making the same statement, running the same patterns, or improvising over the same changes. With his provocative new release “24 Tales”, Alex Machacek has sought an inventive new context for both his incredibly fluid, precise guitar work and his expanding compositional vision.

“I have always liked drums,” Machacek explains. “On so many fusion and jazz records, there is an extended drum solo – sometimes it feels obligatory. At a certain point I thought, ‘How would it sound if I compose something based on a drum solo? Drummers are always getting wilder with what they do in terms of meter and technique…” His fascination with drums led to several experiments with composing music based on (and performed on top of) improvised drum solos – a practice that reaches its fullest potential on “24 Tales”.

“After I played my first gig with the drummer Marco Minnemann, I told him that I wanted to do an album with different drummers,” Alex continues, “where they would provide me with solos, and I would write music for them. Marco said that he had recorded a solo – but it was fifty-one minutes long! At first I thought, maybe I’ll take a section of it to work with…but eventually I decided to take on the whole thing.” Minnemann’s solo – a kaleidoscopic rush of rhythmic, textural, and even melodic devices, all improvised without a click track – became the backdrop for “24 Tales”. (Minnemann also gave this solo to Trey Gunn, John Czajkowski and Mike Keneally, and their interpretations will be released subsequently.)

An astonishingly musical effort, nearly symphonic in its vast range of timbres, use of space, and elegant sense of structure and development, “24 Tales” finds Machacek breaking Minneman’s solo into 24 discrete (but connected) sections. “When I decided to do this,” Machacek explains, “I listened to it – several times. Sitting in front of 51 minutes of drums can be a little intimidating. So I broke the entire solo up into those 24 pieces. Whenever I heard the mood or the rhythmic foundation change, I marked it as a separate piece.”

From rapid-fire 13/16 scrambles to resonant, chiming long tones – all the while colored and propelled by Minnemann’s supple traps – the variety of textures and rhythmic feels allows Machacek to explore an enormous range of guitar tones – often in quick succession, expertly creating and releasing tension and making for unexpected (and unexpectedly appealing) contrasts. Warm, classic jazz hollow-body sounds intersect with frenzied fuzz, acoustic slide, and trebly palm-muted figures, sometimes playing the same passages in unison to create an entirely new tone. Machacek’s compositional process has roots in his celebrated abilities as an improviser, although he is quick to point out that there is not a great deal of actual improvisation on 24 Tales. “Just jamming over Marco’s mania would be hard,” he explains, “I wouldn’t have been able to capture the details of what he’s doing. I tried to catch those little gestures. There are only a couple of sections where there is real improvisation. I think of this as more of a compositional album.”

The scope and depth of “24 Tales” is a direct reflection of Machecek’s experience, commitment, training, and ability. Born in 1972 and raised in Vienna, Austria, Machacek first began studying classical guitar at the age of 8. Simultaneously, he developed an interest in rock guitar playing, from the pure driving power of Iron Maiden to the work of Brian May, who embroidered Queen’s recordings with a telling mix of soaring leads and orchestral ensemble parts. Eventually Machacek became enamored of jazz, with the great Joe Pass serving as his model. He left school two years early, at 16, to study jazz at the Conservatory of Vienna. All the while, he gigged in a variety of outfits – pop cover bands, jazz groups, accompanying singer-songwriters, theatre pit bands, jazz big bands, and classical ensembles among them.

Machacek’s relentless search for his own voice on the instrument was kick-started by the discovery of the music of Allan Holdsworth – whose playing blends rock power with a jazz-inflected scalar sense. What particularly impressed Machacek was the unpredictable nature of Holdsworth’s improvising, with its frequently altering harmonic base and unexpected dissonances. “I was so attracted to his playing,” Machacek recalls, “and I had no clue what was going on. All I knew was it was different, it was great and I wanted to figure out what he was doing.” His next great influence was Frank Zappa, whom he discovered a few years after Holdsworth. “I was looking for something else on a compositional level,” he explains, “and then I found Zappa.” His intense affection for Zappa’s work eventually brought him into contact with former Zappa percussionist Terry Bozzio, with whom he formed the trio BPM (which also included saxophonist Gerald Preinfalk) and eventually recorded 2001’s “Delete and Roll”.

A summer course in Perugia, Italy lead to a scholarship to the Berklee College of Music, where Machacek studied for two semesters before returning to Vienna to finish his degree at the Conservatory. His collaboration with Bozzio began in 1999, at the same time as he released his debut CD “Featuring Ourselves”. After traveling extensively to perform and record, Machacek and his wife Sumitra (who contributes vocals to one section of “24 Tales”) settled in Los Angeles, where he teaches at the Guitar Institute of Technology. His next solo album, “[Sic]”, was released in 2006 on Abstract Logix, and featured Bozzio. “Imagine a composite of Allan Holdsworth’s stunning legato chops and advanced harmonic language with Mike Keneally’s exacting virtuosity and Frank Zappa’s fiercely uncompromising ‘difficult music,’” raved Jazziz, ” and you’re getting close to where this visionary new talent is currently operating.” Machacek followed that album with 2007’s “Improvision”, featuring Matthew Garrison on electric bass and Jeff Sipe on drums.

Created over the course of over two years, “24 Tales” is Alex Machacek’s most detailed and personal statement yet. Largely self-recorded and performed by Machacek, it still seethes with the intensity and unpredictability of group improvisations, while harnessing that energy within a striking compositional framework. The project holds together brilliantly, thanks to careful attention on Machacek’s part. “I always made rough mixes of every piece,” he explains, “and would listen to hear if the transitions are working. My goal was to make each section work both within the entire piece and as individual tracks. There are a couple of motifs that reappear throughout the album. “I’d like to think of this as some sort of gel. There is a lot of musical information on this album, and rather than constantly bombarding the listener with new ideas, I tried to use some of the same ideas in different contexts.”

“Sometimes I get tired of situations where a tune is just an excuse to play a long, long solo,” he continues. “It doesn’t have to be like that. With this project, I definitely put the focus more on composition than on improvisation.”

With “24 Tales”, Machacek has achieved a rare feat: an album fueled by spontaneity yet elevated by compositional acumen and instrumental precision, endlessly fascinating and yet listenable and immediately engaging. “It’s not intended to be performed live,” he concludes, smiling, “but I do plan on taking some ideas and sections and rewriting them to reduce them to more playable, manageable pieces. To perform this music the same way as it is on the CD, with all the complex transitions and layers, you would have to give me an unlimited budget…” 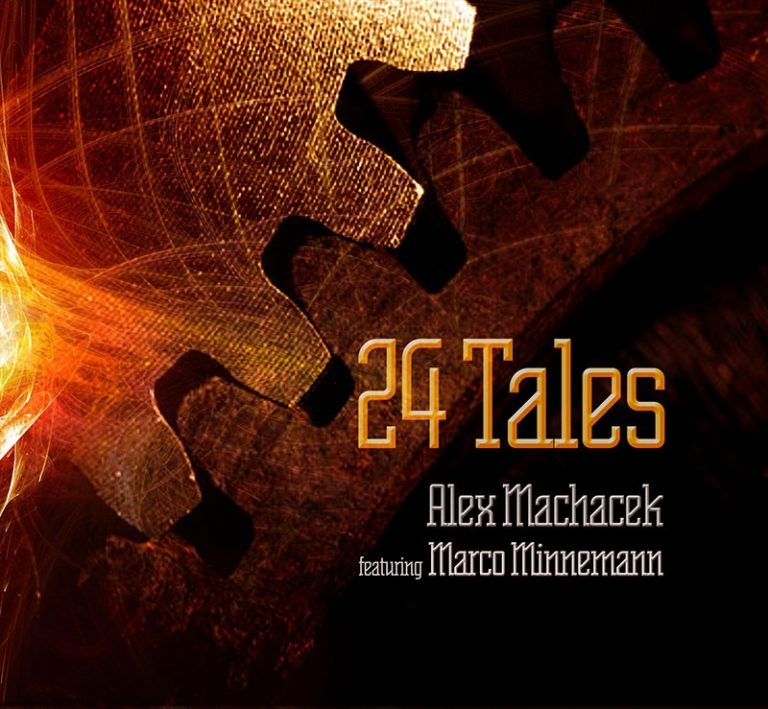 RELEASE DATE: APRIL 14, 2010
All About JazzReview by John Kelman
Read More
"It's not the first time guitarist Alex Machacek has composed around drum improvisation—he did that with three tracks on [sic], his 2006 breakout record and first for Abstract Logix—but he's taken the concept even farther on 24 Tales. It's also not the only release to use, as its basis, a 51-minute drum improvisation by Marco Minneman—Machacek's band mate in keyboardist/violinist Eddie Jobson's Ukz, which debuted in 2009 with the Radiation (Globe Music) EP. Guitarist Mike Keneally, touch guitarist Trey Gunn, and Mars Hollow bassist/guitarist Kerry Chicoine were all given Minneman's metrically and polyrhythmically challenging solo as part of the drummer's Normalizer 2 project as well, but 24 Tales sets the bar incredibly high for everyone else; a true fusion masterpiece that actually surpasses [sic]'s remarkably deep composition and stunning performance."
Buy
Itunes-note Amazon Bandcamp

"I started out taking classical guitar lessons at a local music school. Besides the lessons, I also had to attend theory classes and choir." 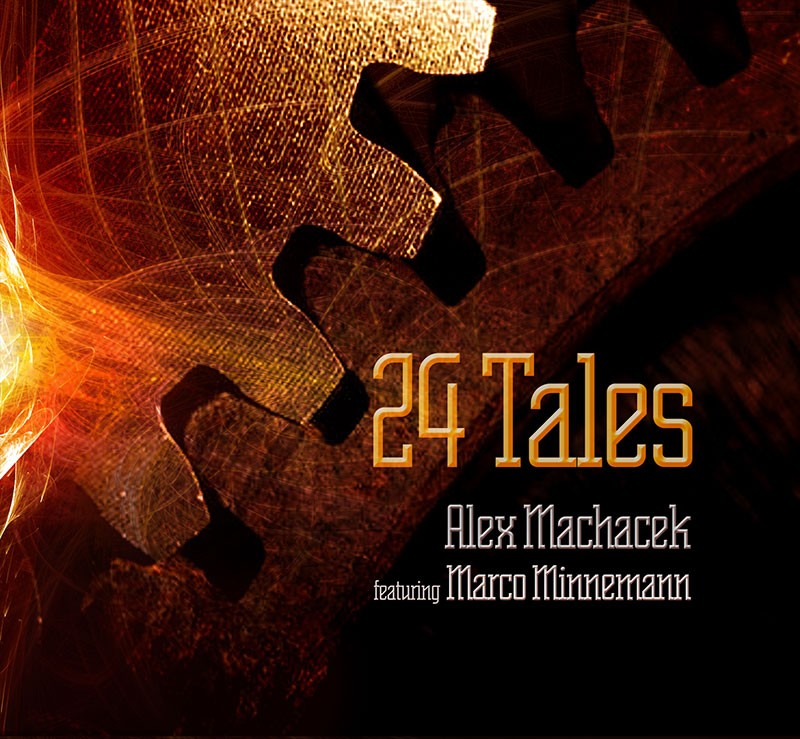