Since first coming on the scene in the early 2000s, composer and drummer Sebastiaan Cornelissen has emerged as one of the most distinctive new voices on the European fusion scene. Whether acting as a leader, sideman, or group member, Cornelissen’s playing combines a sharp sense of empathy and staggering technique with impressive improvisational grace and intensity. His compositions are subtle and melodically memorable, while presenting fertile challenges for improvisation. “U – Turn”, available 6.16.09 on Abstract Logix, is the second solo album from Cornelissen, who currently divides his time between the UK and his native Holland.

Born of transition and experimentation over the past four years, “U – Turn” is a vital, organic statement marked by the multifaceted gifts and restless creative spirit of its maker, Sebastiaan Cornelissen. While best known as a peerless drummer, whose supple, almost melodic playing both drives and colors the ensemble he is performing with, Cornelissen is also featured on “U – Turn” as a composer, producer, guitarist, and engineer. He brings to each role a dynamic, inventive sensibility, and sense of improvisation that imbues not only his playing, but his approach to structure, texture, and composition.

The result of four years of recording, mixing, re-recording, and editing, was a kaleidoscopic album that melded a jazz-derived fluidity with the crackling energy of rock and deep rhythmic grooves that owed equally to funk and swing. A variety of recording approaches were utilized, along with a rotating cast of musicians, including Gerard Presencer on trumpet and flugelhorn; keyboardists Gary Husband, Scott Kinsey, and Steve Hunt; guitarists Susan Weinert, Leonardo Amuedo, Richard Hallebeek, Alex Machacek, and Mike Outram; and bassists Frans Vollink, Johnny Copland, Jimmy Earl, Gary Willis, and Tom Kennedy. In addition to drums, percussion, loops, and programming, Cornelissen contributed keyboards and guitar while mixing and engineering the entire album. 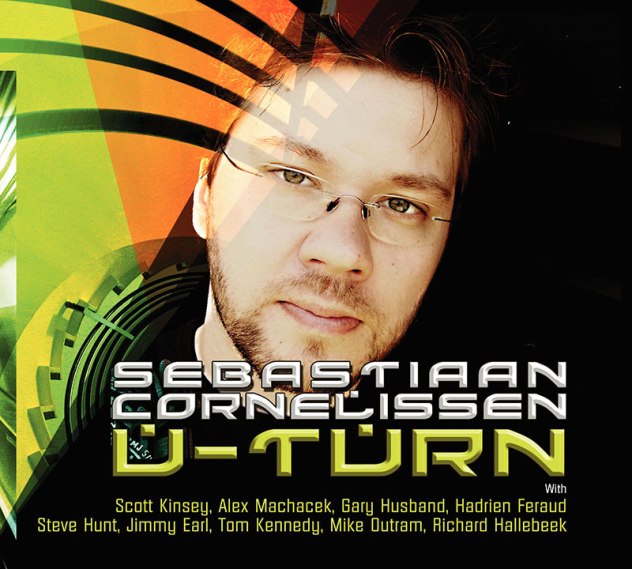 RELEASE DATE: JUNE 16, 2009
All About JazzReview by Ian Patterson
Read More
"It's a minute and forty seconds before Sebastiaan Cornelissen's drums ease into the frame on U-Turn. Although he has a lot to say he's clearly not in a rush; this second solo effort has been seven years coming and has taken four years to put together. The fourteen pieces, which could almost be seen as a continuous suite given their stylistic uniformity, are less about his playing and more about his writing. With the aid of no fewer that seventeen heavyweight fusion musicians, Cornelissen's has set out his stall not so much to dazzle, despite some fine playing all round, but rather to seduce, subtly and gradually."
Buy
Itunes-note Amazon Bandcamp

"When U-turn was released, I did a whole bunch of promo gigs and clinics / workshops in the UK, Germany and Holland."