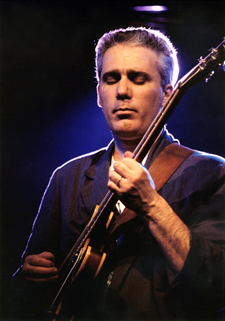 Steve Khan is one of our most distinguished guitar players. Over the last thirty years, he has experimented with jazz, and jazz-fusion to create some brilliant music. A distinguished author, he has written books on subjects ranging from the just published, PENTATONIC KHANCEPTS to transcriptions of Montgomery and Martino. He is a fountain of knowledge.

AL: IS THERE ANYTHING IN THE WORKS?

SK: The truth is nothing specific! However, one could say that I am always, constantly, in the process of preparation for another recording project, even when one is NOT on the horizon! Although I don’t seem to ‘stockpile’ original tunes, I do spend time thinking about and considering music composed by others which I might want to interpret when the opportunity to record arises. When it does appear, I usually begin to write, to compose again. I am, however, in the process of preparing for another series of dates in Venezuela, which will likely occur during the September / October ’03 area if all goes as planned.

AL: DO YOU PREFER PLAYING ACOUSTIC OR ELECTRIC?

SK: Here, I can’t honestly say that there’s a preference. If I could only take ONE guitar with me, when I had to travel somewhere, well, that’s always going to be my Gibson ES-335 which is an electric. However, over the years, I have always felt expressive on the acoustic steel-string (a Martin MC-28). And suddenly, when YOU ARE HERE was recorded, I found my voice on the acoustic nylon-string (a Yamaha APX-10N) as well. So, I now enjoy that very much. Unfortunately, with the very long and cruel winter we experienced here in the Northeast, I opened the case of that instrument, and the bridge had completely snapped off!! I guess the glue dried out. So, it’s been in the shop and is getting repaired. But, the cosmetic aspects, how it ‘looks,’ those things are meaningless to me; it’s the sound and the feel. So, it will probably look pretty bad when I do get it back…..but, not quite as bad as Willie Nelson’s famous guitar, but bad nonetheless!!! [All of my equipment can be read about at: http://www.stevekhan.com/equipment.htm]

AL: WHAT IS THE BOOK PENTATONIC KHANCEPTS ABOUT?

SK: The book is drawn from concepts which I have been sharing with my private students, and those who have attended my clinics and master classes, for now over 30 years. Like many aspects of my early music education and jazz education, these were ideas which I came upon by myself, because during the years when I was trying to learn about such things, the mid-’60s, there wasn’t the scope of information (books, videos, play-alongs, etc.) which exists today. As there are already many fine books dealing with jazz lines and their formation, and various theories about how one can best speak the linear language of jazz, I felt that I had to narrow my focus and concentrate on one area. This book is intended to work hand-in-hand with CHORD KHANCEPTS and function as its linear adjunct. It is, hopefully, a relatively comprehensive study of the improvisational usage of, what I feel are, the two most common pentatonic: the minor pentatonic[R, m3rd, 4th, 5th, 7th] and what I have come to call the dominant 7th pentatonic[R, 2nd, 3rd, 5th, 7th]. In addition, the book tries to clarify the difference between the blues scale and the minor pentatonic scale. With that done, the book shows how one can then backtrack and put to use the blues scale over what might seem to be some pretty uncommon chord structures. It all works beautifully together in the end. The book then seeks and explains, and in great detail, how one goes about applying these simple formations to the basic harmonic families encountered in jazz or any music where improvisation is important. Any instrumentalist could benefit from the concepts in this book. If one is trying to specifically narrow it down to the guitar, well, I’d have to say that obviously those players who are trying to further develop their abilities to improvise would benefit the most. That doesn’t necessarily mean that only ‘jazz’ or ‘jazz-fusion’ players would get the most out it. The book is really geared towards everyone! It is not intended to speak over anyone’s head, nor beneath it. It appears in standard notation with TAB…..so, one could easily say that it’s a rock-friendly book. By that I mean, players, whose primary focus might be in rock, R&B, hip-hop, blues, country, pop, and other areas, should also be able to gain a lot from the shared information. There is yet another fantastic example/play-along CD, only one (1) this time, accompanying the book and its text. The CD features performed examples which appear in the book as well as Steve’s performance improvisations. The book can be obtained from Amazon.com, as well as Jamey Aebersold or directly from Warner Bros. Publications at: (800) 628-1528 or (305) 621-1636. www.stevekhan.com

AL: WHAT WAS IT ABOUT YOUR RECENT TRIP TO VENEZUELA THAT CREATED SUCH A BIG IMPRESSION ON YOU?

SK: Venezuela has become like a second home to me. I never expected to become so enamored of another country, another culture, another language, but this is what happened through an extraordinary set of unexpected circumstances in December of 1998. But, in truth, it began to develop with a simple yet absurd phone call from Manolo Badrena in 1995. My recent trip there to play, for the first time leading my own trio, was perhaps too special for me to begin to explain in mere words. I can only say that I will never ever forget how the music, and the spirit of music-making, within my approach, was received by the people. These were truly the most special moments of my musical life, where live playing is concerned.

SK: “GOT MY MENTAL” (’97) is a recording which came VERY close to NOT happening at all. Were it not for the loyalty and ingenuity of Kenny Inaoka, my sub-publisher in Japan, it’s highly likely it just would not have gotten done! Initially, this was scheduled to be a trio recording with John Patitucci and Jack DeJohnette, but, as I began to craft the arrangements, I started to hear the need for additional percussion. In recent years, most of my listening for pleasure and study has been all Salsa and Latin music. I’ve been lucky enough to become friends with some of the great players from New York City, Puerto Rico, Venezuela, Colombia, and Cuba. It was a great thrill for me that both Marc Quiones and Bobby Allende could be part of this recording as they are two of my absolute favorite players! In addition, Don Alias, another longtime musical associate, lent his special talents to three of the tracks. Brazilian percussionist Cafe helped make my interpretation of I Have Dreamed just what I was hoping it could be, and that is, a unique journey in exploring form…getting through a song ONCE! The recording also features another song from my late father, Sammy Kahn. Here I chose a Sinatra classic, ‘The Last Dance’, but it’s treated as a ballad. I guess growing-up and hearing it playing in the house…no matter what Sinatra’s tempo was, I heard it as a sentimental ballad. I just cannot say enough great things about both John & Jack, obviously two players of great stature, but, please know that these two very special musicians come ready to play and to PLAY HARD…as a leader, you cannot ask for more. I admire them both even more than before. Engineered again by Malcolm Pollack, the recording was dedicated to my dear friend and colleague Don Grolnick who is missed by all those lucky enough to be counted as his friends.

AL: HAVING ACHIEVED SO MUCH ALREADY, WHERE DO YOU GO FROM HERE?

SK: Well, the process of learning in all areas of life is simply endless. So, there is ALWAYS somewhere to go from wherever you might find yourself at a given moment. It is easy to discover what you don’t know, and to proceed accordingly. The pursuit of excellence(of doing something well, to the best of your abilities) is always just beyond one’s grasp); and the truth is, you NEVER get there!!! There’s always something left to do, to be explored. So, in a sense, there is little or no time for self-satisfaction. Sometimes, a pat on the back is all you can do, and then you must be on your way again to the next goal, the next destination. Success (whatever that might be relative to each one of us) should never be measured in terms of fame or stardom, for these are shallow and, in the end, meaningless pursuits. One must try to never be fooled by such things, or the people who are consumed with them, because it / they can only distract you from what is truly important. So, in answer to your question, I just want to continue to get better as a music-maker. That is what I am, that is what I strive to be a music-maker……I happen to make music with a guitar. It is not the other way around!!!

AL: WHAT IS YOUR ADVICE TO YOUNG GUITAR PLAYERS?

SK: I suppose that this answer is connected to the previous response. One, and perhaps most important of all, is NEVER give-up!!! Don’t let go of your dreams!!! No matter how many times you are told that you are NOT GOOD ENOUGH, and countless other cruel critiques, just keep believing in yourself, in your humanity, in your abilities to communicate some part of that, and something good, something positive will eventually come of it. It is easy to be beaten-down and beaten-up by the things people say or the circumstances that life throws at us, but, never allow such things to push you out of the game! Two, simply try to reach the highest level of your own potential. Do not aim low, aim to be the best that YOU can be. I know that this sounds like a trite message from some jive self-help guru in an infomercial but it does have some merit. Measure yourself, and your work against the best that is out there. Don’t settle for less in any aspect of your art form. Three, each time you’re about to play music, try to envision (perhaps even the night before) just how things could go in their most perfect form. Sometimes, these thoughts of great beauty can actually help you accomplish a small portion of your dream with your band mates! It is perhaps an abstract approach but it can help to guide you from the inside out to those who listen. No matter what, I am wishing each one of you good luck and success, success on your own terms!!!