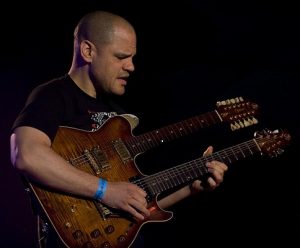 Guitarist David ‘Fuze’ Fiuczynski music lands with a “Lunar Crush”. Never mind that that album is still being talked about years later. Fiuczynski is still shredding. His latest release, “Kif”, is yet another groundbreaking effort. This time out Dave merges his unique jazz-rock-punk output with the sounds of North Africa. David took some time from his busy schedule at Berklee College of Music where he is a visiting professor this summer to answer a few questions from Abstract Logix.

AL: What makes your music so distinctive?

AL: What colors are on your palette now?

DF: Lately I’m working on integrating Indian, Eastern European and East Asian sounds into my playing. I’m very interested most of all in the melodic inflections and embellishments. As a matter of fact, I’m taking an ‘erhu’ (one string Chinese violin) lesson this week!

AL: Your new album is another departure.

DF: I’m very happy about “Kif”. I had an opportunity to play in Morocco in 1992 and all the local musicians told me that Jimi Hendrix came to Morocco. This put a bug in my ear – since then I’ve been trying to mix Middle Eastern (and other sounds) with western grooves. I’ve played with a lot of downtown New York bands that mixed some of this music, but “Kif” is my personal take on that. I always wanted more grooves! So now there’s “Kif”. We worked on this for a long time. It was very hard for me to incorporate these sounds onto my instrument, but I’m very happy with the results.

AL: What has changed in your music from “Lunar Crush” to “Kif” ?

DF: To a certain extent nothing has changed. I’ve always been interested in what I call groove-sandwiching, popular grooves on the bottom, extended harmony in the middle and unusual melodies, players, singing, improv on top. It’s just that now I’m much more interested in the top part being more eastern sounding.

AL: What does the future hold for your fans?

DF: More eastern and more microtonal and ambient. There are a lot of new sounds that I would like to combine and it seems there are new possibilities with microtonal harmonies and melodies.