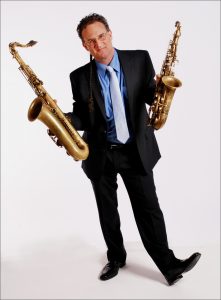 George Brooks has one of the most distinguished sounds on saxophone today. Over the years, he has performed with greats such as Etta James, Zakir Hussain, Anthony Braxton, Larry Coryell and Henry Kaiser. Abstract Logix spoke to George about his project “Summit”. For the CD, Brooks brought together four distinguished world musicians, Steve Smith and Zakir Hussain on drums and percussion, Fareed Haque on guitar and Kai Eckhardt on bass. Summit offers brilliant compositions from George and equally impressive playing from the bunch as they tackle the complex rhythmic and melodic aspects of the pieces. The band will be performing in the Spain and Istanbul jazz festivals this summer.

AL: When did your fascination with eastern music take hold?

GB: I first heard Indian music when I was in the New England Conservatory in 1976. I met Peter Rowe there and it was through him that I started to hear about great Indian classical musicians like Nikhil Banerjee. There were courses in North Indian classical music and I was so impressed by the sound that I decided that I had to figure out a way to put that into my style of music, which was jazz. I started listening to the great Dagar brothers and Ali Akbar Khan who influenced me a lot. With time, I began to incorporate the eastern style into some of my compositions. In fact, I started to learn Alaap, which is where most Indian music starts. In fact, I did some yemen alaap in school. I happened to meet the great sitarists Krishna Bhatt and Terry Riley. After that I spent a year in India, learning the different styles of North Indian music and was deeply immersed in it.

AL: Did you learn the fundamentals of Indian classical music or did you just listen and incorporate what you hear with your Jazz oriented compositions?

GB:I was actually learning all the essential fundamentals of North Indian classical music while I was in school and definitely while I was living in India. The truth is that learning has never stopped…..I learned the structure of different ragas. The gharana, or in other words, the specific Indian school of music that I was a student of, taught that the expression of a raga was more emphasized than the actual rhythmic aspects. In south Indian music the rhythm is a more integral part. For example, the music of Shakti with Zakir Hussain and John McLaughlin was involved with the more rhythmic aspects of Indian music which is great too. The carnatic style of music influences it a lot. A few years later I got into the rhythmic aspects with Terry Riley. Incidentally, I have been listening to Carnatic music lately.

AL: How did this “Summit” project come about?

GB: I have been performing with Zakir Hussain since 1996, going through different incarnations with Krishna Bhatt and Ashish Khan . I gave Kai Eckhardt a call and he was interested, performing in different configurations. The great Steve Smith was on tour with tabla player Sandip Burman and Jerry Goodman during 2001. He was very interested in learning and performing in this musical realm. He mentioned that if I had a project in mind with Zakir Hussain, he would be very interested so, he joined the team. Our schedule worked out great. Kai told me to check out Fareed Haque whom he was already playing with in Garaj Mahal, so we all got together and jammed. It was great. Steve and Zakir recorded live in November 2001. Zakir took the tracks to India where he did some drum overdubs and Niladri Kumar played some sitar on it and so did Tuafid Querishi. We mixed the album just in time for the shows at Yoshis in 2002. Towards the end of the year, we went for a tour of South East Asia. The band had really gelled by then. During the tour Zakir was giving lessons in Indian rhythm forms to Steve Smith who is such a great student of his art. Fareed and I would get together and do some experimentation.

AL: Do you go through a process in writing your music?

GB: I try to keep a particular melody of a raga in mind while maintaining the integrity of a chromatic embellishment. I bring my jazz background to the realm and add some modern complexities to it. Vocals are such an integral factor of Indian music, but I never try to imitate that with my sax. It always serves as a compliment.

AL: Is it a treat or a challenge to record with great musicians?

GB: It is always a treat to have all those great ideas floating in the room, but at the same time it is also a challenge. Being a leader of this formation, I try to keep everything together yet give the musicians their freedom. Once in a while you might respectfully nudge someone in a particular direction but it has been just a great evolvement.

AL: What are you working on now?

GB: I am actually working on some new compositions. I don’t know how they are going to materialize yet. I will be performing this summer with Larry Coryell, something that I am looking forward to. I have been playing with Larry for quite awhile and we did some shows last year with Hariprasad Chaurasia in Dubai and London which went great. We will be performing Summit this year at the Jazz Festivals in Spain as well as Istanbul in July.

AL: We certainly hope that we get to see more of Summit in the near future and wish you all the best.