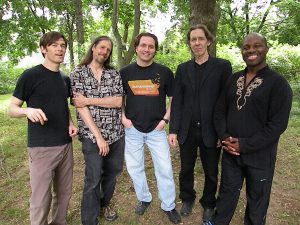 The Mahavishnu Project: Tribute to a Great Legacy

The Mahavishnu Project is one of the hottest electric bands today, paying musical tribute to the legacy of John McLaughlin and Mahavishnu Orchestra. In 2001, this incendiary unit from New York City began performing their unique renditions of music from classic Mahavishnu discs such as “Birds of Fire”, “Inner Mounting Flame”, “Between Nothingness and Eternity” and “Visions of the Emerald Beyond” while remaining true to the cutting edge improvs of the original band and to McLaughlin’s stunning compositions. The Mahavishnu Project is led by extraordinary drummer/composer Gregg Bendian, widely known for his work with Pat Metheny, Ornette Coleman and John Zorn. Bendian has received rave reviews for his and Nels Cline’s “Interstellar Space Revisited: The Music of John Coltrane” (Atavistic), his band “Interzone’s Requiem for Jack Kirby” (Atavistic, 2001) and his sterling drum and vibes work on the long-awaited “We Saw A Bozo Under The Sea” (ZHR, 2001) by former Beefheart guitar whiz, Zoot Horn Rollo. Bendian is joined by guitar phenomenon Pete McCann – who’s worked with Dave Liebman & Randy Brecker, long-time Allan Holdsworth and Billy Cobham keyboardist Steve Hunt, Stephan Crump (bassist extraordinaire for Bobby Previte & Sonny Fortune) and violinist Rob Thomas, who has worked with Andy Summers and Tito Puente. Just a little note of appreciation for what you are bringing back to life. This musical period was the beginning of finding my own way in music, and to hear you guys playing those tunes in such an unbelievable way is quite amazing. Great job!! Keep up the good work. -John McLaughlin (Oct. 2002) We recently spoke to Gregg Bendian about the Mahavishnu Project. He is excited about the rave reviews that the band has been getting from all around the planet.

AL: COULD YOU TALK ABOUT THE IDEA BEHIND THE PROJECT AND HOW IT MATERIALIZED?

GB: I first became familiar with John McLaughlin’s music when my uncle played BIRDS OF FIRE for me. I was 10 at the time and it left an everlasting impression on me. I knew that I aspired to do something with that music at some point in my life. I was heavily into John’s music at a very early age and played in various jazz bands and orchestras at the time, studying all forms of jazz, modal and classical music. Later on, after establishing myself with my own music, I really felt that it was time for me to do something with his John’s music. In 1998 I recorded a version of his piece, ‘Sanctuary’ with my band Interzone on our disc “Myriad” (Atavistic). Then in 2000, I jumped in with both feet and started to fool around with The Dance of Maya, Noonward Race and Celestial Terrestrial Commuters from the Mahavishnu book in the practice room with Kermit Driscoll, Miki Navazio and Steve Hunt. I thought that it might be nice to find a violinist – so Todd Reynolds came in and things began to get quite interesting. We decided to do a gig and we were simply overwhelmed by the response. It was amazing to see how strongly people reacted and since so many people had never heard this music performed live, it was clear that they wanted to hear more of it. We also started to write some of our own compositions that were influenced by the sound and spirit of The Mahavishnu Orchestra. In a nutshell, that’s how it started.

AL: HOW DO YOU APPROACH PERFORMING THE MUSIC IN A LIVE SETTING?

GB: Great question. There are really two approaches. We often perform an entire album as a suite, whether it is “BIRDS OF FIRE”, “INNER MOUNTING FLAME”, or “BETWEEN NOTHINGNESS AND ETERNITY”. We improvise heavily on the actual compositions and try to make them sound like our own voice, while simultaneously remaining true to John’s original conception. More often than not, we perform many different pieces from the various Mahavishnu albums, since the audience likes to hear tunes from each of those records. We also take requests for Mahavishnu tunes from the audience, which has been quite encouraging and satisfying at the same time. We’ll be performing in Europe early next year and one of the things that I’d like to see happen is to perform say, three nights at a club, focusing on a different album each night.

AL: WHAT DO YOU TELL THE CYNICS WHO MIGHT LABEL YOU AS A COVER BAND?

GB: This is my take on it. If someone is performing the work of John Coltrane or Charlie Parker, they are never called a cover band. Like Trane and Bird, the work of Mahavishnu is quite important to the history of jazz-rock fusion. We look at it as it was originally intended – as a platform for improvisation. We do not copy solos or perform the tunes exactly the way they were done originally. I like to think about these pieces as a kind of plastic that can be molded. We are trying to bring out the jazz aspects of the music and pay our tribute to the legacy. In the end, we’re just another kind of interpretive repertory ensemble, not unlike Mostly Mozart if they actually improvised the cadenzas the way Mozart had intended!

AL: WHAT ARE YOUR FUTURE PLANS WITH THE MUSIC AND MAHAVISHNU PROJECT?

GB: We are currently working on recording some our original compositions for an album of music inspired by The Mahavishnu Orchestra. We’re very pleased that the fans have responded quite favorably to our tunes and tell us that they definitely have the Mahavishnu vibe. We hope to tour widely in the future and go to the West Coast and overseas to Asia, India, South America and Australia, to let more people experience this great music through us.

AL: COULD YOU TALK ABOUT YOUR OWN PERSONAL PROJECTS?

GB: Certainly. I have a new record out called “BONE STRUCTURE” (Cryptogramophone) with Jeff Gauthier on violin, Steuart Liebig on bass and G.E. Stinson on guitar. Sonically, I’d say its probably somewhere between mid-70’s King Crimson and the electric Miles Davis era. It is a collaborative group with a mix of ambient and groove textures. There are lots of great jams on there with some very eclectic melodies. I am quite proud of the “INTERSTELLAR SPACE REVISITED” project with guitarist Nels Cline (on Atavistic) where we interpret the musical genius of John Coltrane’s final recordings. And, I’m currently working on a duo project with keyboardist / guitarist Mike Keneally that we hope to release next year on Mike’s Exowax label.

AL: WOULD YOU HAVE ANYTHING TO SAY TO THE READERS OUT THERE?

GB: As Steve Morse would say, “Please come out and support live music !”

AL: Thanks a lot for your time Gregg. Wish you all the best and everyone else involved with the project. Thanks for remoulding the great music of John McLaughlin and the Mahavishnu Orchestra.