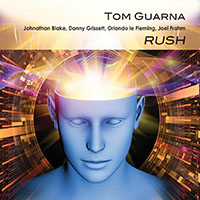 Abstract Logix: “RUSH” is more than a solo guitar album, but boasts incredible compositions. The album is less about one player and more about the atmosphere five musicians create from playing off one another and listening. How did you find a group of musicians that gelled so well?

Tom Guarna: All of the musicians on this recording I have played and recorded with before in various projects. I am very familiar with their musical voices so when it came time to record “RUSH” I knew that this would be a really good combination of musicians that would help bring my compositions to life.

ABLX: You were born and raised in New York City, sought your musical education in the city and now are a staple in the city’s jazz scene. What is it about New York that’s kept you close all your life?

TG: New York is the center for jazz and many forms of art. So many great musicians move here to be around the high level of creativity that New York offers. To have the opportunity to play with so many great creative musicians on a nightly basis is invaluable. It gives you the opportunity no matter what level you are on to be challenged and to be able to grow.

ABLX: I love the texture of the soprano and guitar doubling the melody. What influenced or inspired the combination?

TG: I have always been a big fan of the soprano saxophone and the beautiful lyrical tone it has. Joel has a beautiful Soprano sound and I knew it would work well on the melody for “RUSH”.

ABLX: You’ve studied music at both the New School and Juilliard in New York City. How did both institutions differ in terms of musical philosophies? What drove you to seek further musical instruction?

TG: Attending both of these schools afforded me a very diverse learning opportunity. The New School was pretty broad. It focused on many different kinds of music. Juilliard on the other hand was very focused on the history of jazz and performing repertoire from every period of jazz. One of the main reasons for seeking further instruction beside expanding my knowledge of music was to be around like-minded people who have the same drive and passion for the music that I do.

ABLX: You have played with an incredible list of musicians in your career, proving your ability to change sounds and styles. What inspired the sound and compositions of this album?

TG: The sounds and compositions on this recording are a result of me further developing my own musical voice as an improviser and as a composer. Although I have played with many different artists of varying styles I always felt that my own musical voice could be heard in varying stages. I have never considered myself to be a musical chameleon. Someone who can play each style and sound like a completely different person in each style. I have always felt that I have been able to add my musical voice into whatever situation I was or will be involved in.