Gary Husband (Drums).
“It’s been a real pleasure to revisit this album, open up all the multitrack and completely remix the material. Actually, two of the more understated tracks remain nearly the same – namely the Mark King jam and the solo keyboard piece – but aside aside from those it’s all a very different affair to what you know on our first edition. You’ll even experience a little more of our (initially quite abbreviated) Robin Trower jam!
In addition to all concerning the general tracks, we’re including four bonus selections at the end, which are essentially rough, “in progress” / freshly performed mixes of certain pieces right from the respective various studio sessions. You’ll find a great alternative violin solo on “Between The Sheets Of Music” from Jerry Goodman there, From Volume 2 you’ll hear the origins of my piece with Wayne Krantz… before Wayne himself turned his muse to it. Also the Allan Holdsworth track “Fred” in it’s raw form before any guitar fixes (complete with a little pre-track improv warm up from us all) and the Mike Stern track (also in it’s raw form) as it was before I later compositionally developed it.
Lastly, you’ll find a selection of previously unpublished photographs inside the new cover artwork taken during the various recording sessions depicting Allan, Jimmy Johnson, Steve Topping, John McLaughlin, Robin Trower and others at work.
I sincerely hope you’ll enjoy this all-new sounding “Special Remix Edition of Dirty & Beautiful Volume 1″.
Yours,
Gary Husband” 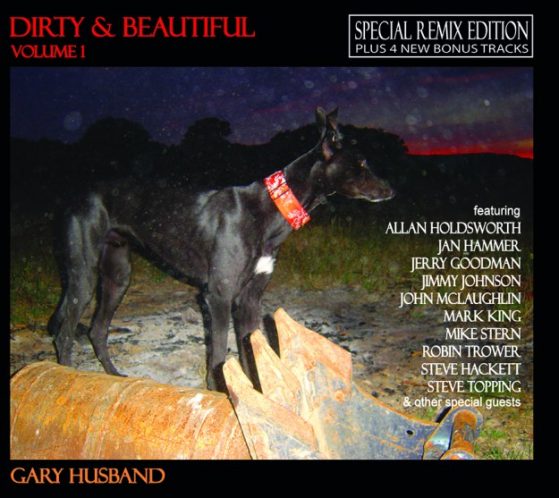