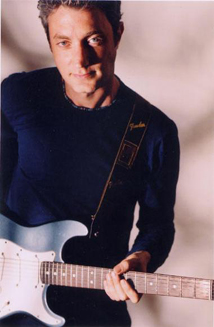 Young Avi Bortnick is John Scofield‘s rhythm guitarist. Though he is quite happy to be playing rhythm guitar for a jazz superstar, he wants to broaden his horizons. In an attempt to do so, he has just recorded his first solo effort, “Clean Slate”. “Clean Slate” is a jazz and funk affair that has a lot of people buzzing. Avi talked about his new direction with Abstract Logix.

AL: How did it all begin?

AB: My parents started me on guitar when I was 7 or 8. Soon after, I started taking classical guitar lessons, and I really didn’t like it. I found classical music boring, and was more into playing with my friends. I practiced less and less, until my teacher thought taking lessons was pointless. So I stopped, and then I really started practicing, and got into guitar, because I was free to just play the simple rock music I liked to listen to. Ted Nugent, Led Zeppelin, REO Speedwagon, Mothers Finest, Foghat, Boston, whatever. I just enjoyed banging out chords and trying to solo. So I basically started teaching myself everything I hadn’t learned while taking classical lessons. Around age 14 I got into soul and jazz and started learning theory as it applies to improvisation. I checked out books from the library and from school — wherever I could — to try and unlock the mysteries of improvising. Separately, at age 12, I started taking piano lessons. Maybe it was because I was older, but I enjoyed classical piano more than classical guitar. I got into funk and soul music in high school, which was a majority black school in St. Louis, so it was easy to get into this music and play it with people. I was in a group called Horizon doing the funky covers of the day — Earth Wind and Fire, Chic, Peaches and Herb, Rick James, whatever. Later we became more of a fusion group, called Mirage. We did Dixie Dregs, Jean Luc Ponty, Pat Metheny and some original stuff. It was really fun and a great learning experience, the best really. The main jazz guitar players I was into were Pat Martino, George Benson, and Pat Metheny. I heard Pat Metheny at age 16 and that really had an effect on me. It was exciting like rock music, but had a lot of harmonic depth and beautiful melodies. But I also heard him and knew that I could never be that good. In general, even though I practiced a lot in high school, and harbored secret ambitions about being a professional musician, I doubted I was good enough, so by the time I went to college, I had decided that it was probably not a good idea to major in music. I compared myself to the greats, and didn’t feel I was a member of that club. But I pretty much always played in jazz combos or other groups, so even though I didn’t major in music, I started working doing gigs pretty soon after college in the SF Bay area. I ended up working so much that I didn’t need a day job. I mainly played African music (with Kotoja) and Caribbean music (with Jeff Narell, Harry Best and other steel drummers). I also started an Acid Jazz group around 1991, called The Dry Look. But eventually, I knew that I didn’t want to make this my life, so I decided to go to grad school and study architectural acoustics. Soon after arriving at the University of Florida in 1994, I put up flyers to start a band. The band became called What It Is, and we became very popular very fast, in Gainesville, and throughout the Southeast. We put out two self-produced records (“When Groove Was King” and “Soul Pop”), and had a fair amount of label interest, but nothing materialized. We moved out to San Francisco in 1996 and played on the west coast and around San Francisco. Eventually, I had enough and left in 1999. I was already working in acoustics, and just switched to making this more the focus of my working life. Then in early 2000, everything changed when John Scofield called me. I’ve been with him since.

AL: What was What it is?

AB: What It Is was a great band in its day. It started as a continuation of my instrumental funky group, The Dry Look. But Jerry Kennedy, What It Is’ bass player, revealed that he was a really good singer. So we became more vocal oriented, and Jerry started writing more of the tunes. The band had a strong retro flavor, but was pretty organic and original, I think. I think we also separated ourselves from other bands in that we had songs with melody, structure, chord changes, rather than vamps on one chord and long boring solos. The records are pretty much impossible to find these days — maybe used, though people who have them tend to really hold on to them it seems. Anyway, we were not only good musically, but we put on a strong, fun show. We were inches away from being signed, but labels had a hard time figuring out a marketing angle.

AL: You have a degree in ARCHITECHTURAL ACOUSTICS. What in the world is that?

AB: In architectural acoustics, the acoustical consultant basically gives advice to an architect about sound related issues — how a room sounds, sound isolation, and noise control from the building’s mechanical system. Typically, I’d receive a roll of drawings and go over it with a trained eye, looking for problems and recommending changes to design.

AL: How is it playing with John? You have to hold back on the soloing side of things.

AB: Playing with John has been fantastic, though since I don’t solo in a traditional sense; my soloing chops are pretty down these days. I can get back up to speed with a couple of weeks of practice, though. But my rhythm guitar playing and sampling chops are all much better than years ago.

AL: You have just finished a new album.

AB: “Clean Slate” is more about my overall guitar playing and composition, rather than just rhythm guitar playing and sampling stuff. Actually, some of the tunes sprung from a desire to avoid doing the funky guitar playing thing. So I think people will be surprised to hear it, though I couldn’t put out a CD without throwing in a dose of what people might know me for. Anyway, I play guitar, bass, some of the keyboards, some percussion, and even some drums. I pretty much engineered all of it myself, and mixed it myself. I worked on it for over a year, off and on, and much of it was recorded with my remote setup — iBook and AudioSport Quattro USB interface. I have a killer keyboard player, Michael Bluestein, on it, and several excellent drummers. Most of the drumming was the last instrument recorded, after I had recorded everything else, so it’s sort of backwards. But much of it sounds very organic, like it was a band playing live in the studio. The styles of the CD range from rock, funk, country, African, electronica. It’s a pretty fun record, but also reflects my belief in the primacy of melody over extended soloing, though I do solo on the record. The best solos, though, are Michael Bluestein’s.

AL: What’s next for Avi?

AB: I’m not sure. Right now, I’m still touring pretty heavily with John. I want to make another CD, much more electronic-oriented, but I’m not sure when I’ll put it out. John’s funky band is going to be on hiatus for a while starting in October, so you might be able to find me in a cubicle somewhere, buried in a set of architectural drawings.