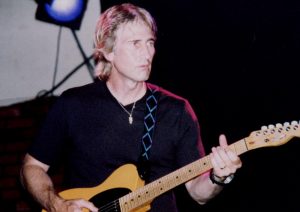 Australian Brett Garsed began playing guitar at age 12 after hearing Deep Purple’s Ritchie Blackmore play Speed King. Basically self-taught on the instrument, his first band consisted of his two cousins and a friend. In July of 1985, Brett was featured in Guitar Player magazine’s Spotlight column, which was devoted to exposing new talent to the rest of the world. His new album “Big Sky” is being highly touted. Brett talks to Abstract Logix about his music.

BG: For the “Big Sky” album I wanted to write all the material myself and then let Ric and Toss interpret their own way. I generally improvise on my own and try to clear my mind of formulas or stock progressions. I try to let the song grow naturally instead of forcing it which usually makes for a better song but it may mean it’ll take awhile for the composition to complete itself. I’ll run my initial idea till it’s locked in my mind and then go for a walk or something and let my imagination tell me where it’s going to go next. I actually do a lot of writing while I’m in my car stuck in traffic. I really like the input of the players so I let Ric and Toss just do their thing. When you work with musicians as brilliant as those guys they always play just the right thing for the song so the best result comes from letting them interpret the song the way they feel it.

AL: This was your first CD as a leader.

BG: It was quite daunting actually and I have to admit it was a bit of a freak out when I realized that I was the one with the final say as I’ve always worked with other people in the past. When you release something to the public as your own vision it can be a bit scary considering you’ll be the one the barbs hit if people don’t like it but I just tried to make sure that I was putting the integrity of the music first rather than trying to impress anyone. That way I was assured that I’d enjoy listening to the album years from now and whatever anyone else thinks of it is up to them.

AL: Are you successfully bridging the gap between pop and fusion?

BG: Most of my music is probably more related to rock and pop than fusion anyway so it’s not that much of a change. The fusion influence for me is mainly the improvising aspect and also some of the harmonic ideas I use but I always try to write a good melody that stands on it’s own as that’s what I enjoy about music. I was heavily influenced by Jeff Beck’s “Blow By Blow” and “Wired” albums as well as Bruford’s “One Of A Kind”. I see these albums as masterpieces of composition and even though the musical language they use is complex it only serves the song. Good writing is the same whether it’s pop or fusion, at least it is to me anyway.

AL: What was it like playing with Shawn Lane and others on the rave-up Centrifugal Funk ?

BG: I had a lot of fun doing that album although Mark (not Mike) Varney wanted me to overplay much more than I’d liked. It was a really great album for me to be involved with though as it still spreads my name till this day and it gave me an opportunity to hear myself alongside such amazing players as Frank Gambale and Shawn. Luckily I didn’t end up making a fool of myself! I didn’t really meet Shawn during that project but met him about a year later while I was touring with Bobby Rock and he’s a perfect gentleman as well as a genius musician.

AL: How do you feel fusion is going over in the States?

BG: Fusion in and of itself seems to be quite healthy in the US although I may be the wrong person to ask. Perhaps it’s a lack of melody in instrumental music that deters your average listener. It was the attention to melody that attracted me to those early Jeff Beck albums and even though the modern fusion of Tribal Tech and Allan Holdsworth is much more challenging harmonically and rhythmically it’s still brilliant writing with strong melodies and hooks, just like great pop writing.

AL: T.J. has an important place in your development.

BG: TJ Helmerich is my musical brother and we compliment each other perfectly. TJ is actually one of the main people responsible for me believing in myself enough to create my own music and put it out there. He’s a genius musician as well as a world class vocalist and one of the best recording engineers on the planet. We’ll always work together as a team. I wanted to do my own album as I’d rather write with TJ instead of bringing completed tunes in that he couldn’t contribute to. I feel what we do together is very unique so I didn’t want to dilute that so there’ll be more Garsed & Helmerich albums coming out.

AL: What is next for you?

BG: More of everything! I’m always pushing myself to grow and learn so I intend to keep working and trying to be a unique voice with original ideas. As I said, I’m not interested in regurgitating the past so I’m always busy exploring the language of music in my own way and contributing to the genre instead of transcribing other people’s hard work and building a career on that so, expect the same thing only different!

AL: By the way, you waited a long time to release your first CD.?

BG: It took me that long to raise the money to buy the equipment to do it. Plus I’d been doing a lot of gigs with Toss Panos and Ric Fierabracci and I just couldn’t pass up the opportunity to record with them. The minute I heard them play I knew it had to be them on the album. It’s been an honor for me to work with musicians like them and I’m grateful that they’d want to work with me. I’m glad I waited this long as I’m a more mature musician now and I feel my writing is stronger.