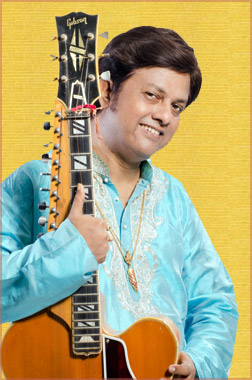 Indian Raga Music thrives on improvisation. No two performances by the same musician produce the same result. For a musician with substance, therefore, the sky is the limit. His improvisations within the framework of a Raga or within the limitations of the instrument he plays become a novel experience for himself as well as his listeners. Some go beyond and open new horizons in the field of their work. Debashish Bhattacharya is one such most amazing music personalities of the world whose dynamism of artistry and creativity place him as a Genius.

AL: You are a pioneer in the music you perform. For those who might not be aware of you, could you say a few words about your heritage, your music and your adaptation of your culture in your music ?

DB: In reply I give you a story: We are a family grown in years, Brahmin Singers, and educators by generations, learning music has always been by hearing it, following the melodic passages, remembering the compositions , so as rhythmic was a natural practice of life, learning ragas and compositions from elders in family, was a discipline and much respect- like the samurai or Kong fu cultures in far east. Practice was related in some families like us to prayers and worshipping the Super Power. There had been offering of compositions in marriage from one family to the others like dowry. Transfer of property! Composing to remember lovable incidents and in respect to the guests’ arrival was a courtesy. It was my father’s generation who has suffered the shock caused by second world war and partition and riots, who had to fly away in a night with out a single rupee in hand, and later struggled for the life and spirituality. It is him, with my mother who sheltered my power and let it breed in a way how it should be, in his strength, that is how we got back the tradition in our generation again.

AL: Your new record “Calcutta Slide Guitar” have been getting rave reviews everywhere. What are the musical concepts on this record?

DB: It is a full of lots of unspoken – unshared truth and unheard story. It is a massage for the people of this world to aware them:

1) Who do not find time to listen music with attention to it.
2) This album speaks about our passive behavior towards music, as instance…in a public toilet music is still on in the small speakers, even you are not listening-abuse of music. Husband and Wife fighting each other- music is in the background-again abuse! The album request my audience to give more time to proper hearing the album next time.
3) Music says about the emotional bond, and bond of humanity, specially the Lovers eyes and Anandam speaks of innocence…the true beauty of human kind.

AL: You are one of the very few people I know who is a world class musicians and also a luthier with your line of guitars that you design and build. What are these instruments and how do you visualize them to be used? Can it be used in a context under than Indian Classical Music?

DB: I like the idea of living in a planet of string instruments-which no one claim as have played before, or seen before. I visualize them as the updated version of Indian raga instruments of 10th century meant for the 21st century onward, Yes they are as well as new utility of western novelty. These can bring a delta twang, or cry of blues as well as preserve Indian sensitive traditional ragas.

AL: Does you ever feel that the freedom which strict forms & rules can paradoxically give especially in classical Indian tradition can also be a limitation in any way? Do You yearn ever to be outside that, even if only to be ‘like a child again?

AL: When you know one side of the river more, more you know the other side, it is the way simply how one get systematic layers of information on the discipline of music. Strict discipline of forms and rules are given to the students.. to learn…but a born artiste does not confine the soul in it. See Rabindranath Tagore…See Ali Akbar Khan…Ray Charles….they are the real example of true spirit of Music.

DB: For me I am a ever borne child, to me all the universe is a great mystery so the music is. Believe me every day I learn some thing or the other from my guitar or from myself…it is ever grown bubble…more you grow, bigger is the surprise!

AL: Does you ever wish to compose something very short without the more thorough developments that are usual in the tradition?

DB: I have done a lot of short compositions. 10 compositions of Mahima, which has been popular worldwide is basically my own compositions. They are based on Indian Ragas, only one can appreciate it in that fashion when one knows the taste, for others it has a universal expression.

AL: Generally Indian classical string performers play their instruments without any effects such as delays or distortions. Do you feel any positive benefits of blending effects with the beautiful clean sound of your instrument?

DB: I feel both the clean sound and distortions or delay is required for an artiste, only an artiste can handle it…not everyone.

AL: Slide Guitar has been around in the West for a while and especially original blues players such as Robert Johnson and lately Derek Trucks (Allman Brothers) have been quite original and innovative in their music. How do you think if at all, can your music fit in with traditional blues?

DB: I am a big fan of Robert Johnson. Blues are mostly heard in Indian Ragas, and slide guitar is meant to play blues on it. Have you heard Tagore street blues -in Mahima, or Song of Life-in Sunrise? Both the compositions of mine came out from Raga Gaoti and Folklore of North East. Indian Ragas have plenty human expression hinted in itself. Ragas-as they are global phenomena.

AL: You must have students come and visit you from all over the world. How do you usually start off their training especially for those who do not have a background in Indian Classical Music?

DB: My school have done really nice with four students from abroad(we can not accept more than six every year). I am happy that these students have done very well, very attentive, had lots of questions, gone through the syllabus, did their stipulated exercises and next year we have already reserved four, our target is six this year. In music we teach from basic to the higher level, all classes are individual, so it does not clash the individuality.

AL: What are your plans for the future. Do you intend to make any crossover records?

DB: Souvik, you can not dream today that your next generation will be alright! There was a king….., now there is no such king in music world, no such God fathers. I am working every moment of my life in a hope that there will be enough population in the world who will believe in the universal humanity and human expressions, so that they can win over the soul less muscles-seen everywhere with the parameters of artificial intelligence. My new compositions are very ambitious to involve few stars of the music world to adore and accept them.

AL: Thanks for the wonderful conversation.

DB: Thank you Souvik for such wonderful work doing for music by Abstract Logix and inviting me to the interview. I thank to my beloved readers of this interview, any further questions will be welcome to info@debashishbhattacharya.com or debashishguitar@gmail.com