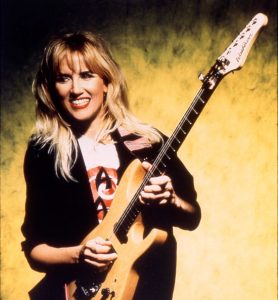 There are very few musicians who have the double ability to play and record for other people and still manage to maintain their own voice and personality on their instruments. Jennifer Batten is one of the few. Between working for Michael Jackson and Jeff Beck amongst others she has recorded two very unique and passionate solo CDs and is in the process of recording her third, which will be released later this year. I get the opportunity to play and teach guitar together with her several times a year here in Tokyo and this year I also took the opportunity to interview her for abstractlogix.com. Being the lovely person that she is, she happily agreed to the interview and also brought me cous cous and Jell-O from the states because I cannot get them in here in Japan. – Chris Juergensen, March 29th, 2005.

CJ: I understand you have left L.A. and are living elsewhere now. Is there any particular reason for the move?

JB: I moved to the northwest USA in 2004, leaving behind 20 years in L.A. and 17 million other residents. It got a bit too crowded for me. It occurred to me while fighting through the horrible traffic one day, that most of my gigs were in other countries, so as long as I have access to an airport, I can live anywhere! I’ve also done a lot of sessions through the mail, and now I’m sending work to producers via the internet. So, I moved to a small town in the forest that smells like Christmas trees. The air is clean and the water is fit to drink right out of the faucet. Imagine that! And the people are much more friendly than those with the big city rat race mentality. It’s a long overdue and refreshing change for me.

CJ: What about bears? Any encounters yet?

JB: Not yet, I keep the lid on my garbage can locked down tight.

JB: I only did a few travel gigs in ’04 and also went secretly to London to surprise Jeff Beck for his 60th birthday when he played the Royal Albert Hall (headlining for the first time). I made him a stained glass 1932 roadster hot-rod which you can see on a new portion of the web site: www.jenniferbatten.com/glass/htm. It’s based on the hotrod in the “American Graffiti” movie, which is a favorite of Jeff’s. It was fun to take some time off in‘04 and concentrate on energy input instead of constant output. In 2003, I flew to Canada, Japan, and Europe 3 times each and by the end of the year, I never wanted to travel again because I was so burnt out! Flying is like an interrogation since 9-11….one goofball nutcase shoe bomber and we all have to remove our shoes before boarding a plane!

CJ: Speaking of stained glass, I’m noticing the groovy stained glass pick hanging around your neck! You, by chance, didn’t make it, did you?

JB: That’s right, I spent a lot of 2004 learning to work with stained glass and I’ve added to the e-store on my site stained glass guitar pick necklaces. There are 5 colors to choose from. They are soldered with lead free solder and have 18 inch silver chains. I hand cut each one from a sheet of stained glass. The whole 10-part process is detailed on the site. Here is one I made especially for you (Chris is smiling uncontrollably as she hands him a lovely Blue one)!

CJ: Wow! Thanks. Who would have ever guessed, a guitarist, stained glass artist and an entrepreneur all at the same time? What other kinds of cool stuff do you have in your e-store?

JB: I finally made a significant change in the web site this year. We are now able to take credit card payments. I know a lot of folks living in other countries need to have this option. We’ve also got a killer new design in string dampeners that work better than any previous models and fits on the sides of the headstock so you don’t have to screw anything into wood.

JB: As you know this interview is taking place with you here in Japan and I’ve got a lot more traveling coming up this year, including China. I’ve never been there before so I’m really looking forward to it. I’m also slated to do a concert tour with Japanese Taiko drummer (JVC recording artist) Shuichi Hidano throughout Japan in June/July. I’ll also be doing a daylong seminar at the National Summer Guitar Workshop in Chicago, for the first time. All news and tour dates will be posted on my site as soon as they’re confirmed. I’ll also be completing my next CD.

CJ: Ah, the long awaited third CD that I’ve been waiting patiently for! Tell me about it?

JB: The new CD is still not done but is very close. I’m hoping it will be out in the fall. It’s a departure from the last 2 in a big way. I’ve programmed most everything myself this time although there are also a few guests. There is a huge variety in drum and synth sounds for example and I’ve used some of the advantages of recording on a computer to make some interesting yet unplayable sounds, and effects. Lots of ear candy! It’s still very much a guitar album but not in the traditional sense. There are no extended guitar solos this time out. The focus is on the songs and sounds more than anything. I’ll have some samples of things to come, up on the site in the next months.

CJ: Let’s move backwards in time here: How did you get the coveted Michael Jackson gig (that I would have died for)?

JB: The normal way. I had been living in LA and went to the audition. I knew that they would want me to play the stuff just like on the record so I learned it that way and I already knew the “Beat It solo from playing it in a cover band. Plus they asked me to improvise some funk rhythmic stuff. I also played my tapping version of Giant Steps. It was really just a matter of being prepared plus having something special up my sleeve.

CJ: And after a few world tours and two solo CDs any normal guitarist would be ready to die satisfied but you get the gig of all gigs, Jeff Beck! How did you manage to get it?

JB: I met him at a London studio where he was recording the “Crazy Legs” record. He asked if I wanted to hear some tracks. Well….hell yeah! At one point he played part of “Blue Wind‿ for me and a few other of my favs. It was so enlightening to see it played up close and hear the nuances that make the notes soooo Beck. He handed me his rockabilly Gretch guitar he’d been recording with but I kind of clammed up and didn’t play much. I gave him a copy of my first CD that night. I never really expected anything but I got a call from him asking me to do his next tour. I was pleasantly surprised to say the least.

CJ: What was it like, touring with Jeff Beck?

JB: Compared to the 100 people that toured with the Jackson camp, there were only 12 of us with Jeff. There were 6 people in the band bus and 6 crew, so it was much more family like. Jeff’s a very personable guy and didn’t do the star trip at all. He’s very down to earth and he wants his ‘family’ to be together and celebrate after a show. There were always 2 bottles of chilled champagne waiting for us after a show in the dressing room. We’d usually have meals together too. It was a happy time. He’s got a fantastic sense of humor, so there was a lot of laughter. We watched things like “Austin Powers” and “Monty Python” on the bus rides.

CJ: What did you learn from the whole experience of working with Jeff?

JB: That would take a whole book right there. I can’t begin to sum it up easily. I guess ultimately I walked away with a renewed joy for music and creativity. His sense of wonder and searching for musical adventure is boundless and inspiring. He listens to everything and I’d kind of gotten burnt out on the guitar world when he called me to join up. He turned me on to some fresh stuff I wouldn’t have listened to otherwise. I think he helped me to lighten up in my attitude about playing too. The whole macho guitar player seriousness of the 80’s and 90’s started to feel more like WWF competition to me. Now I just want to have fun and share that fun with the audience.

CJ: What are you listening to at present?

JB: It’s funny because when I graduated from music school the only thing I wanted to listen to was guitar music but now I mostly listen to anything other than the guitar. I really like a lot of different genres these days. I listen to techno and ethnic music amongst other things. I’m into Afro Celtic Sound System and Crystal Method. Oh, now that you mention it, you have a new CD out too, don’t you Chris?

CJ: And the rolls reverse, the interviewer becomes the interviewee. Yes it’s true, I released a CD last year called Prospects and it has been selling rather well considering my status as an independent artist. Thanks everyone! Anyways, back to you. Why did you get into the guitar in the first place?

JB: My sister had one and I was jealous!

CJ: Hmm… Jealousy is also one of my favorite motivators. Do you have a particular approach or philosophy about playing the guitar?

JB: When Eddie Van Halen first came out, I was knocked out by his playing. I read every single interview he ever did and one thing he said left a really big impression on me. He said that he always tries to approach the guitar like a three year old. If you think about what a three year old would do with the guitar you would guess that rather than sitting down with it and playing it in the conventional way, he would be more likely to slap it and bang on it with his hands. Not that studying theory and technique isn’t important but I think that innocence is just as important.