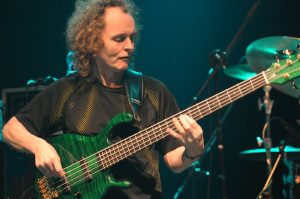 Bassist Mark Egan has been a fixture of fusion’s bottom end for almost 25 years. He came to fame as a member of the Pat Metheny Group. But his lyrical playing and inventive mind have been in the mix for several noteworthy group projects and some solo efforts. Along with drummer Danny Gottlieb, Egan produced several outstanding albums as a founding member of the fine fusion ensemble “Elements”. (Another Elements CD is due soon). He also enjoys the status of being Bill Cosby’s favorite bass player. Egan spoke to Abstract Logix about his influences and the state of the art of fusion music.

AL: Can jazz or fusion music survive the current atmosphere?

ME: I think there is still a place for jazz and fusion in the music world today. I come from a jazz fusion background and still create within that style. In that genre there are a lot of musicians who are still pushing the envelope. It’s a bit more difficult than it was ten or fifteen years ago because music has become so compartmentalized. For instance, on radio today there are many different categories – smooth jazz, straight-ahead jazz, contemporary jazz, ambient, pop, rock, funk etc.. Whereas in the late 60’s there was just FM radio and they would play anything. You could go from listening to Jimi Hendrix to Miles Davis to Alan Watts reciting works about Zen philosophy to Charlie Parker, followed by the Mahavishnu Orchestra with John McLaughlin.

AL: Who influenced you?

ME: I have had many stage of influence. I was originally a trumpet player and some of my first influences were Miles Davis, Chet Baker and Lee Morgan – the whole lineage of trumpet players. As I got into jazz through trumpet I learned about bass players in the jazz world. Due to the fact that I’m a Baby Boomer I was also exposed to all the music that was happening in the sixties – Motown music, Cream, Led Zeppelin. So there was that side of my influences, as well. During that time, when I was about 15, I got really interested in the bass from listening to the radio. There were a lot of great bassists playing – James Jameson .. Chuck Rainey was playing with Aretha Franklin. So I really tuned in to the bass and those performers influenced me. When I went away to the University of Miami to study music I got deeper into it. One of my great live influences from that period was Jaco Pastorius. Being a member of the Pat Metheny Group was a big influence on my playing.

AL: Do you think you have influences on your composing?

ME: Compositionally I get my influences from many places. I studied Western Harmony and Counterpoint in college, so I had a whole classical background of composition. I was also influenced by great jazz composers such as Duke Ellington and Bill Evans and Miles Davis and John Coltrane. I listened to people like Joe Zawinul and Wayne Shorter, who are also great composers. I was especially attracted to the impressionists Dubussy and Ravel. When I write I try not to set limits. I try to keep myself open, to hear things. For instance, lately I’ve been waking up and going straight to the instrument and playing, just ideas, not reading or anything. I’ve been coming up with a lot of ideas, writing them down and making a point of saying, Today I’m going to finish a song with this idea. That’s been very helpful. So I did set myself that limit. As far as writing expectations go, I’m always looking to write a great melody, a great groove and a great song. It takes a lot of work – focusing and experimenting to come up with something that you’re satisfied with. There are only a few songs that I’ve written that I really, really like a lot. The others are approaching a place that I’m aspiring to.

AL: The sound you get is very distinct from other bassists. Does your sound affect what you write?

ME: I’m very affected by the palette of sounds that I have. Sometimes I write on the bass and I’ll come up with a melody. Because the particular Pedulla bass that I have has a lot of sustain and is really growly, it makes me play a certain way. It takes me into a specific area and that influences my writing process. I have many different ways that I write. Sometimes I’ll just write in my head, sometimes I’ll write at the piano or a keyboard synthesizer and get a certain loop or a groove going and work with that. Sometimes I’ll play along with a groove, think of a chord progression and write a melody after that. Another time I might write a melody and then harmonize it, come up with a groove that fits it. In general, the writing process starts for me with a mood or groove and then I go from there.

AL: You and Danny Gottlieb go back a long way.

ME: Danny Gottlieb and I met in 1971 at the University of Miami, both students. We both played in the jazz band together. Outside of the university we played in various ensembles and did a lot of gigs together. When Pay Metheny was going to form his group he asked Danny and me and Lyle Mays if we would be in the group, so we all got together and that was the original Pat Metheny Group. It was really then that Danny and I focused and came up with a sound together. We were on the road almost every day for four years. And when you play that much you really become a team and develop a sound together as a rhythm section. From that we branched off and started our group Elements which has a focus on the rhythm section – bass and drums, but also features the great Saxophonist Bill Evans, and the great Keyboardist and composer Clifford Carter. Danny and I continue to go and play together. We have a special rapport. Having played together in so many circumstances we know where each other are going to go and we compliment each other. And that’s a great thing, because drums and bass have to work as one thing.

AL: How did you get involved in writing for TV and the movies?

ME: After I left the Pat Metheny Group in 1980 I went back into the New York recording session scene. When I moved to New York originally in 1976 I was doing a lot of studio work because I was with the David Sanborn Group. Being in that band indoctrinated me into the whole New York session scene, and I left it to go on the road with Pat Metheny. In my session work I did a lot of playing for TV and movie scores. I met people who worked in those fields, they liked my music and one thing led to another. A lot of the projects that I was asked to write for TV or movies were very creative. I was free to write pretty much what I would write if I were doing my own record, with a lot of textures and bass features.

AL: Toninho Horta has had some effect upon your music.

ME: Toninho Horta is an incredible musician, guitarist, and composer. I first met him in Brazil in 1980, and I was a big fan of his even before that for his work with Milton Nascimento. Toninho has taken the Brazilian harmonic approach to playing guitar from the likes of Antonio Carlos Jobim and has created his own sound with it while still carrying on the tradition of Brazilian music. It’s very rich in harmony from the influence of classical western music fused with jazz and Brazilian rhythms. Toninho Horta’s writing inspired me to write in a Brazilian style, melodic and rich with chords.

AL: How does being the bandleader change things?

ME: Being a band leader is a lot of responsibility. It’s a different perspective than just being a player in a group and having someone else being the overseer of the musical arrangements, or the direction of the band, the logistics of traveling, or touring, of paying everyone, getting paid. All of those things are what a leader has to be involved with. You are the one on the line. When it’s a success it’s great, but when it’s a failure it’s not. Luckily we’ve been pretty successful with Elements and my solo projects where we always end up on our two feet.

AL: What do you have in your CD player currently?

ME: Lately I’ve been listening to Joe Zawinul’s new CD. I think it’s called Places & Faces or Faces & Places – great bass playing. It’s great to play along with. I also listen to a lot of classical music, Indian music – Zakir Hussein. I have a new Trio record that I’ve been producing and which I play on with Danny Gottlieb and a great piano player called Jeff Laibson. So I’ve been working on that and listening to it a lot. I am also listening to Keith Jarrett and the live Trio recordings that he’s done. It’s been good for me in making sure that our piano trio – the Jeff Laibson Trio, come up to those standards.

AL: You are currently touring with Larry Coryell. What kind of stuff are you playing?

ME: We have a trio with Paul Wertico on drums, formerly of the Pat Metheny Group. We’re doing a wide spectrum of contemporary jazz – standards to fusion. We’re doing originals from everyone in the group. It’s a great outlet for all of us. We just finished recording a record which is called “Tricycles” because it’s named after one of my songs of that name recorded in Heidelberg, Germany. It’s a really good representation of what we do live and has the same energy as a live concert even though it is a studio recording. And that’s a rare thing.

ME: As I mentioned earlier, I’m completing a trio record with Jeff Laibson and Danny Gottlieb which will be out in the fall 2003. I’m excited about this recording because I’m using my acoustic, upright bass which I haven’t recorded with that much. I mostly played electric. It’s very experimental, free playing and I’m really happy with the results. As far as live touring I’m on the road with Larry Coryell. I also have a trio with a great guitar player named Jeff Ciampa, and Danny Gottlieb and we’ll be touring and playing around the Northeast. I’m also gearing up to do a new studio Elements record, which is long overdue. I’m working on compositions for that at the moment and hopefully will be recording that this year. That will feature Bill Evans and Clifford Carter. My label, Wavetone Records is also putting out an electric jazz trio record with Jeff Ciampa, Danny Gottlieb and I called “House of Mirrors”. That’s coming out at the same time as the Laibson Trio.

ME: I’d like to say thank you for supporting creative music. It’s great to have a web site like Abstract Logix. We need more places like this on the Internet and in the world. There’s a lot of great music out there to hear and play, and we need an audience like you out there to share it with, because that’s why we do it.