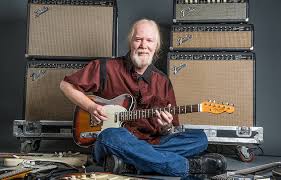 Jimmy Herring is one of guitar’s most distinctive voices. Currently touring with Grateful Dead legend Phil Lesh, he is better known among jazz and fusion fans as one of the founders of  The Aquarium Rescue Unit, Project Z with drumming icon Jeff Sipe and the late Ricky Keller and the Jazz is Dead band with Billy Cobham and Alphonso Johnson. Apt Q258 and Jimmy Herring have been close friends for over 10 years. Their musical collaborations have become legendary. A second Project Z recording will be released sometime next year with Greg Osby on saxophone. Jeff (Apt Q248) agreed to interview Jimmy Herring for us. Jimmy agreed to the interview as long as he could also interview Jeff. They spoke for hours. Therefore, a highly condensed first part of the conversation between Jeff and Jimmy appears below.

JS: So how do you get that tone Jimmy? And those licks?

JH: (busting into laughter). Which one? Tone 1 or tone 2? Most of the times, I play tone 1, tone 2 gets too heavy … I try to play those triplets too. It is called shuffle picking. On a good night, I can make it come out, but sometimes it sounds awful . I hate it when I do it too much and I keep reminding myself not to do it a lot. The entry point is so critical and so is the exit.

JS: Well , if you can pull it three nights in a row you are a genius (laughter).

JH: You got that right. Phil Lesh asked me the other day whom I thought is the greatest guitar improviser in modern times. I told him without hesitation that it was Allan Holdsworth. I was surprised that he had not heard him, so I need to get him some of Allan’s music. Some of his old stuff like ‘Secrets’. I was so sorry to hear that Shawn Lane passed away. Man, he was such a sweet, gentle soul, an absolute giant. Jeff, do you remember the shows in Memphis with ARU? Shawn would love to come out and jam with us. There was one night I remember that he took the first solo on something and I had no reason to follow him. It was just brilliant. I loved hanging out in his house with his massive video collection and we spent all night watching crazy videos. … It’s such a shame that he died so young. Those were some of my best times.

JS: He was something else. A true absorber of everything around, every kind of music. I just learned so much from him.

JH: Jeff, we have to start doing something again soon. Lets get everyone back again. The Colonel , Oteil .. I have asked Matt Mundy a few times whether he wanted to do something again but I think he has given up music for now. He likes what he does today and he is happy, so that’s all that matters to me. But it will be nice to play some music again together.

JS: Matt might change his mind later, but I am happy for him.

JH: We need to go to the studio sometime and just start playing. A live free-form album. We should get everyone together for it. You know Jeff, we need to write a book sometime about our past and our experiences. I think it is bizarre. I still remember meeting you and Col Bruce. I had just returned from GIT to Atlanta and I heard that Scott Henderson was playing with some local Atlanta musicians. And it was you on drums. I was just blown away. My jaws dropped. The next thing I know, you ask me whether I would like to jam. And I was like sure, I am thinking to myself should I even try to do it with these guys ( laughing). It was such a great time for me. I learned so much from everyone. Bruce would play his strange tricks on everyone. He would make fun of all of us. He would never call any one by his name. He would ask me ‘so what is your name’? I would say ‘My name is Jimmy Herring’. I was the only guy that did not have a second name, the rest of you guys did. What a trip!!!! A piece of history Souvik, we were playing in Boston with ARU. It was really cold. The next morning we were supposed to do a radio show. Anyway, I had barely slept and I was just out of it . So Bruce, Jeff and Matt went by themselves to do this radio thing. It was one of the best things that I have ever heard in my life. I realized that day that they did not really need me in that band. It was just great to see my idols in music just killing it. One other time we were in Nantucket and we were all hanging out. Bruce just casually asked me to play an ‘A’ chord on the guitar. So I did. He was like , no man, I want you to play an ‘A’. What he really wanted me to do was to play a chord that was shaped like the letter ‘A’. We spent the rest of the night playing all the letters in the alphabet. It was just an eye opener. It sounded great. In one sense, it was a new beginning for me. A revelation !!!!

AL: Jimmy you are too humble!! So, what do you think of the new Project Z recording that is going to come out next year ? I have heard it and I have to say it is heavy and experimental, nothing that I have ever heard before. It is perfect for silent movies!!!

JH: Man, I really like it. We did not even have plans really to do a record. We just went to the studio and did whatever we were doing. It felt like we were little kids again. It was great. Totally live and spontaneous. The music was so liberating. I was not under any stress or obligations. Greg Osby just played his parts. He was quite excited to be a part of it. He was supposed to play with me and Jeff in the studio, but he had to go to Europe. So a few weeks ago, we went to the studio together. The music is a little out there. Some of the shows that I did with Project Z was by far some of my best playing, especially the real small venues. So Jeff, we need to go to the studio soon and mix this thing.

JS: Early next month would be great.

JH: I really had a great time doing the whole thing. There was so much freedom in what we did…Jeff , do you remember Oteil on the 432 trip?

JH: Well here’s how it goes. 440 is the concert pitch to use. Anyway Oteil was reading some Egyptian mythological stuff and he came up with the fact that we should all tune to 432 since it is supposed to aggravate some kind of Chakras in your body. 440 supposedly aggravates the sexual elements in ones body while 432 rouses the mental power. So it is kind of funny, all of us playing to 432 and one night John Popper from Blues Traveller sat in with us and he was not aware of what we were doing. Man, he totally sounded out of tune at no fault of his own. Of all the guys that used to jam with us, only Derek Trucks really knew or figured out what we were doing, so he always played a step back . He just sounded great and he was just 14 years old at the time. One other time, Steve Morse was in Atlanta and he was going to play with ARU. Before we started I went and told him that the rest of the guys in my band were a little crazy. Steve was like ‘ What do you mean?’. It was difficult for me to explain to him, so I said well these guys all tune a half step. Steve was like ‘ ok I got it’. I was like no, they all tune it so that the strings all hang like rubber bands. It was hilarious .

AL: So how is the musical trip with Phil Lesh?

JH: Oh man, it is a great learning experience. There are some 200 songs that I have to remember because they can pick and choose from any number of them. There is a certain amount of freedom in the musical context. It is a different kind of freedom. Bruce always used to tell me ‘Freedom can be a prison if you don’t know how to handle it’. He was absolutely right! I can really understand what he meant. . We do something called ‘The Triad Harmony’. John Molo and Phil will start something and I will join in and play the melody lines. It is a great band to be in and a real good time .

AL: Thanks guys for an enjoyable and humorous conversation. I wish you both much success in your endeavors. I am sure that fans can’t wait to hear the new Project Z record next year as well as see you guys perform together again. The just released album ‘ The Calling’ surely teases us. So When is the next ARU show?????