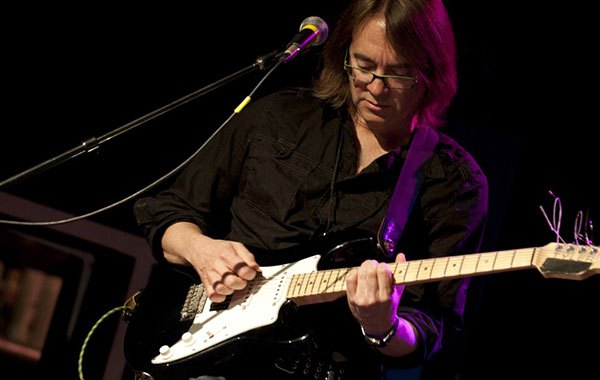 Guitarist Wayne Krantz cuts a wide swath. His anti-establishment view of music and the music business has him trying to develop new ways to create and market his sound. Currently he is working on some educational tools that he hopes to offer on his website. Krantz has performed with the likes of Billy Cobham and Michael Brecker and led his own bands as well. He spent some time talking to Abstract Logix.

AL: You’ve formed your own trio.

WK: I felt like I had my own music to play. I knew I’d never be able to play completely the way I wanted to in other people’s bands.

AL: You employ a lot of texture in your playing. You seem to stop and go and go and stop. There are moments of silence.

WK: Maybe what you’re hearing is just my effort to be rhythmic. I know my rhythm and melody are so closely related they’re almost the same thing. The silence clarifies the rhythm.

AL: Descriptions like fusion, jazz, or rocker don’t seem to fit you for some reason.

WK: I imagine most people trying to work creatively aren’t inclined to align themselves with one idiom or another. It kind of defeats you before you start. But I know it’s helpful for listeners to use those kinds of words. I don’t think that way. I’m just reacting as naturally as I can. Maybe it’s appropriate that I can’t think of a word for it.

WK: Not really. That was fun because it was an opportunity to do a little personal tribute performance in memory of John Lennon, which was how I thought of it. But doing covers always feels kind of gratuitous to me. Though of course, like everything else, that could change.

AL: Tell us about your trio.

WK: Well, it’s been Tim Lefebvre and Keith Carlock for six years now. I’ve been very, very lucky to have guys like that for so long. We developed some great stuff together. At this point they’re both getting too busy to do everything, so I’m on the lookout. But nothing replaces a regular band with a regular gig. You can’t beat it.

AL: Is the trio format best for your music?

WK: I think my style has developed to fit the trio format. My playing has always been that way, it seems to unconsciously adapt to whatever situation I’m in and to whatever musicians are involved. I hope that’s a good sign, though I think it confuses the audience sometimes. I probably won’t be adding a saxophone player anytime soon, but I could see a certain kind of keyboard player being of interest.

AL: What’s around the corner?

WK: I’m releasing a 2-CD live album on my website of stuff from the 55 Bar from the last year. The next project I have in mind is a studio record. I’m writing for it now. And I’m developing the membership service on my site. And I am practicing when I can.

AL: Tell us about your new CD?

WK: It is two hours of unedited tracks from the 55. It’s called “Your Basic Live”. The recording is lo-fi; done with a single $100 mic and my little DAT walkman. But it definitely captures the vibe. I like it a lot. It’s a good indication of what it was like there at that time.

AL: Do you have any words of wisdom for striving guitarists?

WK: Ummm…practice while standing up. Unless you sit down when you play.

AL: Do you have some favorite guitar players?

WK: I haven’t really listened to guitar since 1985. I quit trying to find my own sound and I never got back into it. I tend to think of the jazzy guys that I know that are more or less my age – Henderson, Stern, Scofield, Metheny, Frisell. But the level of the guys that came after that is shockingly high, too. I check in on them now and then. Basically anyone you hear about has to be excellent in some way. As far as people maybe nobody has heard of, there’s a kid up in Finland named Teemu who is great. And a guy here in NYC named Mark Stanley, he’s really good too. There are great musicians everywhere. And we need every one of them.